Release day and Review of Forsaken by R.M. Gilmore 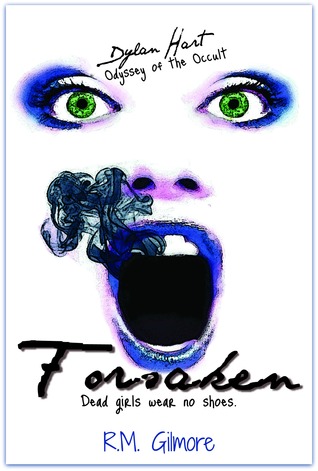 The ever-cynical Dylan Hart has been given a run for her money. As her life crumbles around her, a new terrifying world makes itself known.

After a gut-wrenching escape from New Orleans, Dylan and her group of oddball friends are left wondering if their lives will ever be as they were, leaving Dylan with the fear she may be losing her mind altogether. When new information comes to light, it becomes clear there is a veil of ignorance that has hidden away the ancient and deadly. As the truth claws its way to the surface, Dylan learns she's in more danger than she ever imagined.

Desperate to survive the consequences of her actions, Dylan seeks assistance from a less than trustworthy ally. The deeper into her own fears she delves, Dylan's standard unwavering resolve breaks away, leaving in its wake a raw center the world has yet to see. Prepared to fight to save herself and the last of the friends she has left, Dylan has to ask herself, what is the price of badassery?

Dylan still has her big butt, eyeball deep in this paranormal bullcrap. This time, she doesn't just have the voodoo peeps and vampsters after her though. There is a new detective from New Orleans investigating Tatum's murder, plus Tatum and a demon. Will Dylan ever catch a break and get back to her "normal" fat self? I seriously doubt it!

We do get to see a different side of Dylan. She actually can be serious and get in touch with her feelings. We also learn more about Cyrus. Dylan really does go through a lot in this book.

True to Dylan fashion, there are a bunch of great one-liners that come from her smart mouth.

"I just popped his gunpoint cherry. At this rate, I should start notching my gun case."

It does end in an awesome cliffhanger. But it is a freakin awesome one and you won't be (too) mad about it.