Review for Chasing Midnight by Shyloh and Alex Morgan 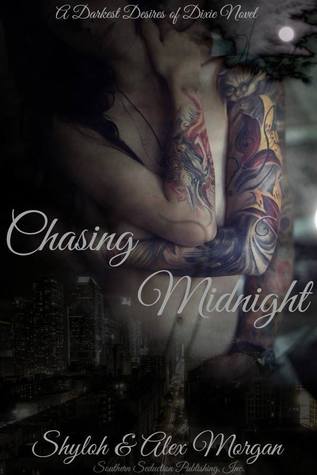 Blurb:
Quinn Mason is a young Southern gentleman. Perhaps, gentleman is a stretch for how he lived his earlier years. He was the kid whose life seemed charmed, a popular athlete in high school who won a full scholarship. Life was on track for him until the death of his parents. In one terrible moment, Quinn went from having everything being everything for his young siblings. He left college, and used the money from his parent’s life insurance policy to buy a bar. The bar supported him and the kids, affording him the ability to give for them the life they were robbed of, even sending them to college. Mhisery Bellemy has returned to Midnight, reluctantly. Her mother died, and she is left to take care of her drunken father, and the family cafe´. She had escaped the small town’s clutches as soon as she was of age, and swore never to return. Now, her siblings have turned to her, leaning heavily on her for help. The woman who got out of town and made a life she loves is now forced, by the bonds of family, and the weight of obligation, to return and give up what she had worked to build for herself. These two are unlikely to cross paths, but chance throws them into the right place at the right time. Quinn’s brother is the catalyst that brings Mhisery into Quinn’s line of sight. And that’s all it took, one look and he knows he has to have her. The golden boy athlete is now drawn to the tall, tattooed woman stepping off the last bus into town. Will Quinn ever have the woman he desires, and make her his own, or will she return to the life she loves far away from the small town of Midnight, and Quinn, or will she stay and make a life with the man she loves? Chasing Midnight tells a story of love, friendship, and sacrifice. This talented duo, Shyloh & Alex Morgan, will rip your heart out and have you falling in love with the inhabitants of this quaint, quirky, town. Welcome to southern seduction, and the town of Midnight, where the Darkest Desires of Dixie become a reality.

This is the first book in the Darkest Desires of Dixie series.  It was a good read, but I felt it could use a little editing and a fine tuning.  Story wise, it was basically a couple stories in one.

Mhisery left Midnight as soon as she graduated high school, only to return 10 years later to help her sisters and brother with their dad.  Their dad has turned into the town drunk after his wife, their mother, died a year earlier.  He needs someone with him constantly.  Even though it was eluded to that Mhisery helped take care of him, we never actually see any interaction between her and her dad until the cemetery scene.

Quinn left college to raise his younger siblings when their parents died in a car accident.  Family is everything to him.

Chance is Quinn's younger brother and a man-whore.  I did like Chance and after that epilogue, I want his story.

Quinn and Mhisery love each other and will go through a lot in this book.

"I would give anything to make you stay in Midnight.  With me, I'd help you care for your daddy and your sisters.  I'd do whatever it took to make you happy.  Baby girl, I would hang the moon, and stars, if it was what you wanted.  There is nothing more I want in this world than you, here, in a home, with me."

This story could be a solid 4 stars for me, if it had the finer tuning and was cleaned up some.  It did change point of views a lot, which I like, but it would be in Mhisery's point of view for a few paragraphs, then change to Quinns and repeat what happened a few paragraphs back.  It made the story have a one step forward, two steps back flow to it.

Overall, not a bad read though.