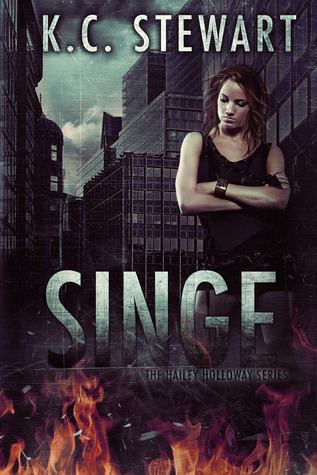 Hailey has been taken.

She was alive and had a dragon boyfriend with a shiny new body. Life was fantastic. Or it was until she was drugged and pulled right off the street. Hailey finds herself no match for the supernatural world. Will Dak come after her or did their latest battle of arrogance verses stubbornness ruin her chances of rescue?

Word of his return was making its way through the dragon world and all the way to his runaway Mate. After hundreds of years of searching and wondering, Katherine was back and making herself at home. Dacea is stretched thin as he looks for Hailey and attempts to keep Katherine from moving in.

Silas has a secret.

His mind is set and he’ll tear through whatever gets in his way. With a little more research he hopes to have his suspicions confirmed. And when they are, his discovery will change everything.

This is the second book in the Hailey Holloway series. You do need to read Spark, the first book, before reading Singe. Singe picks up a short time after Spark ends.

Hailey is healed and now out of the hospital.  She and Dak are now dating. He is no longer just a voice in her head, but has his body back. Their relationship isn't an easy one. They do love each other and accept that they are mates, but Hailey still needs her space and he is ready for them to be officially mated.

"'I love you." He leaned down and kissed her. "I know." Hailey smiled with a mischievous twinkle in her eye. "I love you like a fat kid loves cake." He laughed. "You sure know how to make a moment special, Babe."

Silas is still up to no good. But, he does end up redeeming himself some, in my book. I'm still unsure about him, but I know he would never, intentionally hurt Hailey. Well, more than he already has.

A blast from Dak's past, Katherine, is back, and now they are on the verge of a war.