Review of Spark (book 1 in the Hailey Holloway series) by K.C. Stewart 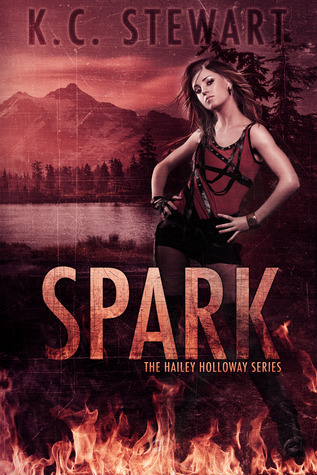 Copywriter by day, nerd by night, Hailey Holloway is living the post college dream. Her life may not be flashy and exciting but it’s enough for her. After a late night at work, Hailey stumbles upon two dragons brawling in the middle of Philadelphia. In an act of kindness and lapse of sanity, she comforts the dragon who was left behind to die. In doing so she inadvertently invited the soul of Dacea into herself for safe keeping. Hailey just wants to live her life as simply and quietly as possible but with the voice of a disembodied dragon in her head, she has little hope of achieving her goal.

Dacea will do anything to be free of Hailey, a human who is moments from checking herself into a psychiatric ward. He is grateful to be alive, but at what cost to his sanity? The dragon world is in upheaval. Green is at war with Red, and he is of no use to anyone while stuck with Hailey.

The solution to their problem is not without its risks. But just how far will Hailey go to be free of the dragon?

This is a funny new twist on dragon shifters. I love dragon shifter paranormal books and this one, isn't like one I have read before.

Hailey is the main female character in this book. I have to say that I love her snarky personality. She has her dorky moments, as well. But that's another reason to love her. Her comebacks had me laughing out loud throughout the story. What's not to love about a character that thinks she is going crazy because she has a dragon living in her head?

Decea, or Dak, as Hailey calls him, is that dragon. He came across as a stiff character, personality wise, at first. I did really like him also.

Darby is their little witch. And Thalia, or Lia, is the muse/goddess, of this little quartet.

Will they be able to get what they need to from Silas, the evil and demented, green dragon leader? Will Dak be able to separate from Hailey, and get his body back? There are a few little twists in this story. This is a great read, that will have you laughing and wondering what will come out of Hailey's mouth next and what will happen next. Definitely a series I will continue to read.