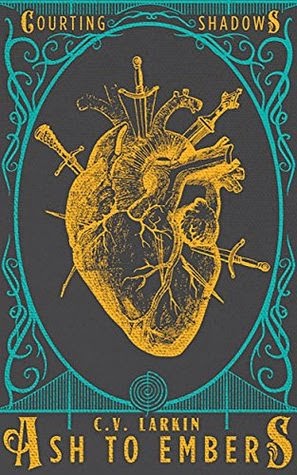 If Tian wasn’t a badass sociopath she’d be an emotional basket case. Warped is a pesky side effect of an immortality enslaved to the Dark Court of the Unseelie Sidhe. After an endless life of servitude she craves oblivion, but hey, she'll settle for the status quo that keeps her from being traded to an endless supply of sadists and psychotics for small favors. Too bad, the Sidhe Oracle is both and he’s tasked her to find a relic he’s lost in the human world. His violent insistence leaves her with two spectacular problems. The first is obtaining said Faerie relic without seeking help from her own kind. The second is a brutal hot stranger named Sio, who keeps derailing her cozy little train of soulless emotional vacancy.

Sio has the temperament of a hero and all the hobbies of a villain. The normal life he struggles with is a cover for the time he spends burying an abusive past under long lines of anonymous bedmates and bouts of violent underground fighting. Trouble is, his version of normal has been on the implode since lousy judgement and a spectacular sexual performance ran him afoul of a local wizard.


When Tian saves Sio from an assassin in the bathroom of a local nightclub, the only way out is a nice swift drop kick into the masticating shadows of Tir Na Nog. There Sio comes face to fae with a lifetime of personal demons, a murderous pack of rugrat night terrors, the meaning of true love, and the disturbing realization that the past he’s run from may not be the biggest secret in his life.


Unfortunately, the wizards are waiting for his return and they intend to kill them both.

I wasn’t sure what to expect when I started reading Ash to Embers, but I was pleasantly surprised. C.V. Larkin has written an original and enthralling novel combing elements of our world and the fantasy work of the Celtic Fae. Larkin has woven the lore of the past with our present world.
I loved that the main characters Tian and Sio are as flawed as they are. They begin with absolute emptiness. They are not nice people, but you grow to love and admire them. They are complex and layered, continuing to reveal more and more. Larkin has a brilliant way of creating beauty in a touch. The other characters are just as intriguing and complex, helping to move the story along with candor and humor.
The worlds that Larkin has created are darkly rich and ugly, which I loved. She has taken fantasy, romance and horror and mashed them all together in a rich tapestry of intricate plot and sub-plot. My only complaint is that Larkin’s overuse of uncommon words often took me out of the story. Please do not misunderstand, I love that the author used words that are often ignored in the everyday vernacular, and they painted amazing visuals, but at times, it seemed overdone and I felt myself being pulled to the words rather than enjoying the imagery Larkin was trying to create.


Despite the occasional removal from the story, I was enthralled. I loved that Larkin pulls no punches and writes gritty, dark ugliness as well as emotional beauty. I would absolutely recommend this book.

Ash to Embers is a paranormal romance that takes place in San Francisco and in Tir Na Nog (Fairie). It is written in the third person narration by C.V. Larkin. This is the first book by this author that I've read and it definitely won't be the last.


This is a tale about two beings who are so totally different yet fit together so well. She has lived a harsh life, or lives. She is a warrior who has lived a life of servitude. He is a beautiful man who seems to draw attention to himself without even trying.When they meet the chemistry is electrifying. She is sent on a mission and he gets caught up in it. She feels the need to protect him and he wants answers. There are some very dangerous moments that nearly kill them.
In my opinion this is an awesome read. The storytelling is fabulous and the author paints a wonderful picture keeping you into the story until the end and leaves you hanging enough to desperately need the next story. I highly recommend if you like paranormal/fantasy romance.