Review: One Night In Daytona by Ann Grech 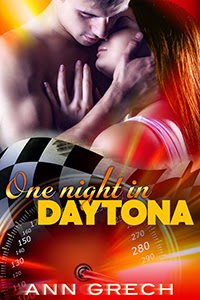 Jos Farris was on top of the world, leading the Daytona 500 until a simple mistake ended his race and possibly his career. Cassie Lane’s day had gone to hell; on national television her star whistle-blower backed out of the story that would have made her career, making Cassie look utterly incompetent.

But Jos’ day suddenly looks up when the red-headed beauty sits down next to him in a biker bar in Daytona Beach, Florida. Cassie can’t resist the chemistry between the two of them. And she’s not the only one. The sparks sizzle as soon as they touch, but is their love affair fated to a one-night stand or will destiny bring them together again?

One Night in Daytona by Ann Grech is a quick read about two people where one night in Daytona Florida can change their lives. Jos Farris is down on his luck, playboy Nascar driver whose career is about to end. In a biker bar he meets Cassie Lane a reporter who’s in the same boat. After a few drinks, the two head back to her hotel for a one night stand. The next morning they go their separate ways and have to face the reality of losing jobs. After months of trying to move on and figure out a new path in life their roads collide back in Daytona where sparks fly again for the couple.
This story is a fast paced read and by the end of chapter two the couple is already hot and heavy, making chapter three all about their lust filled night together. The sex scenes were hot but took away from getting emotionally in touch with the characters. I was also disappointed that the story being set in Florida the highlighted locations were: a biker bar, the hotel suit, and news building. I had hoped for more use of the location. I did like the refreshing change that after the one night stand that the male lead, Jos, was emotionally missing the girl and had hoped for more. This sexy fantasy read is what some girls hope for after a fling, finding Mr. Right and him thinking she is Ms. Right too.