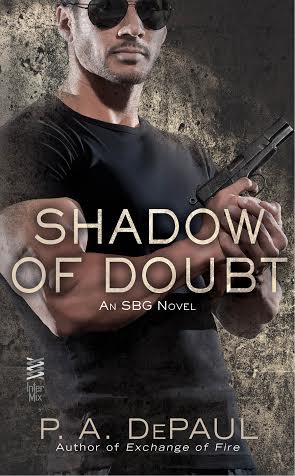 The new SBG novel from the author of Exchange of Fire.
When her secretly filmed tryst shows up on the internet, Michelle Alger goes on the run. She has no choice. Not only was her one-night stand the son of a US senator, but he’s been murdered—and she’s the number one suspect. With both the senator and an avenging drug lord on her trail, her life is in danger. There’s only man she can trust. He saved her once, but will he still be her hero six years later? Captain Jeremy Malone and the rest of Delta Squad have the senator’s order: find the mystery woman who killed my son. But to Jeremy, she’s no mystery. Six years ago his team of Green Berets rescued her from the torturous clutches of a Colombian cartel, and he’s never forgotten her. His personal and covert mission: find Michelle before anyone else. When he and Michelle do meet again, the sparks are explosive and consuming. They’re also dangerous as hell. Because with each new bit of evidence, Jeremy suspects that Michelle’s innocence may be a ruse—a beautiful trap set by a woman who has even more secrets yet to bare. 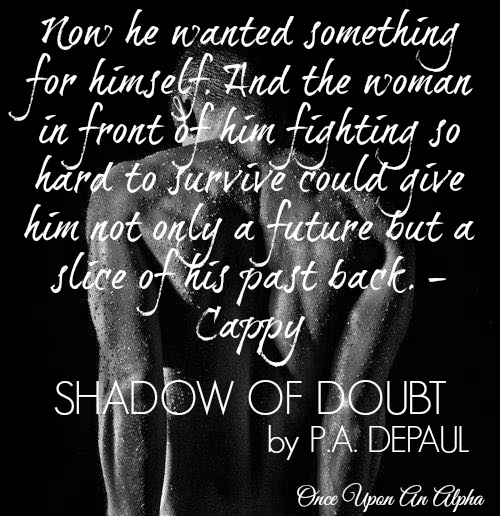 FOR SHADOW OF DOUBT
Michelle paced the length of the room for the thousandth time. There were exactly eighteen steps from the bathroom door to the sad excuse of a table. Not the biggest rooms here at the OTE. A long moan drifted through the left wall followed by a slam, then rhythmic banging. “Oh, God. Yes,” a woman cried. “Give it to me, daddy.” Whomp. Whomp. Whomp. The cheap picture over the bed rattled with “daddy’s” frantic pace. Michelle rolled her eyes to the ceiling. “Really?” she asked the stained tiles. As if her situation wasn’t bad enough, she now had to listen to a bad porno. She glanced at the clock. 5:22 p.m. Her fingertips felt cold. She went to rub her hands together only to find her palms had a thin layer of sweat. How messed up was that? Darn nerves. For years she had fantasized about this moment. So many versions ranging from innocent to completely far-fetched had captivated her dreams. Only Fate would deliver the version where she was holed up in a seedy motel with Big Daddy providing the sleazy soundtrack. “Yes! Right there! Harder!” She tuned out the “Oh-Gods,” and the “That’s-the-spots” and replayed her favorite fantasy. The one where Captain Jeremy Malone sought her out only to find out she had been given a new identity and placed in Witness Protection. Devastated by the government’s unwillingness to tell him where she had been relocated, he made it his personal mission to find her. Though it took years, he finally discovered she became a park ranger in Indianapolis. He immediately requested leave from the military and showed up at her apartment door. She laughed at her foolish daydreams. Even if the man had hunted her down, then what? Her track record since Colombia had been Michelle, zero; Disaster, every time. The looks of disgust on her partners’ faces when they saw her body usually killed whatever passion she had been able to muster through the fear and memories. Only one man had seen beyond carnage and made her feel as if it would be okay. A hoarse shout bled through the thin wall followed by a lot of groaning. Hopefully that signaled the end of “daddy’s” session. Had she done the right thing calling Cappy? How long had he been in Indianapolis? God, had she been this close to him all this time? What if he’s seen the news? Would he call the police, FBI, Army to tip them off? She started to panic. Oh no. What had she done? Knock. Knock. Knock. Michelle jumped at the sound on her door. The blood drained from her face and her heart pounded against her ribcage. No way in this short span of time could it be another drunk with the wrong room. Which meant . . . He’s here. All her insecurities rushed through her brain as she stared at the door. Everything from her thunder-thighs to her lack of makeup and hungover status swamped her. “Michelle?” a muffled, deep male voice called on the other side. She’d know that intonation anywhere. It slid over her, tightening the knot in her stomach. She rubbed the dancing area and snagged on a button. Jerking her head down, she started cussing. She still had on the ugliest uniform ever. Not one ounce of sexiness could be wrung from the drab olive and gray clothing. Sweat pooled under her arms, not helping her confidence and— Wait, what was that? She squinted and dabbed a spot on her shirt. Great. She had on the most god-awful stained uniform ever. This was so far from her fantasy she could only hang her head. About par for the last twenty-four hours. Knock. Knock. “Michelle,” Captain Jeremy Malone said again. “It’s safe to open the door.” No one shouted “POLICE” or “FBI.” That was a good sign, wasn’t it? Didn’t they have to identify themselves first before entering? That meant he was alone, right? She threw her shoulders back and strode across the room. Closing her eyes, she took a deep breath and opened the thin wood. Holy Cheesus on wheat toast. How could she not recall how HUGE he was? And that was saying something, since she was considered tall. But he had to be at least a half a foot over her head. Not only tall, but ripped with muscles . . . Like no-way-could-this-exist-in-real-life muscles sprouted beneath a tight T-shirt. Since he had worn a helmet the last time they met, she had never gotten to see he had dark brown hair, buzzed in a military crew-cut. His stance was all business; exuding strength and power and don’t-mess-with-me-cause-I-know-eighty-ways-to-kill-you. But one feature commanded her attention—the same one haunting her for years. His eyes. Those wonderfully expressive deep coffee-colored eyes. “Cappy.” She shuddered. After so many years of longing, she was finally staring into their depths . . . and he was staring right back.
** BOOKS FROM THE SBG NOVEL SERIES ** 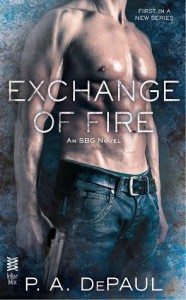 P.A. DePaul is a multi-genre romance author including paranormal fantasy and romantic suspense. She originally hails from Carroll County and Baltimore County, Maryland, but also lived in Macon and Warner Robins, Georgia. She currently resides in a beautiful community just outside Philadelphia.