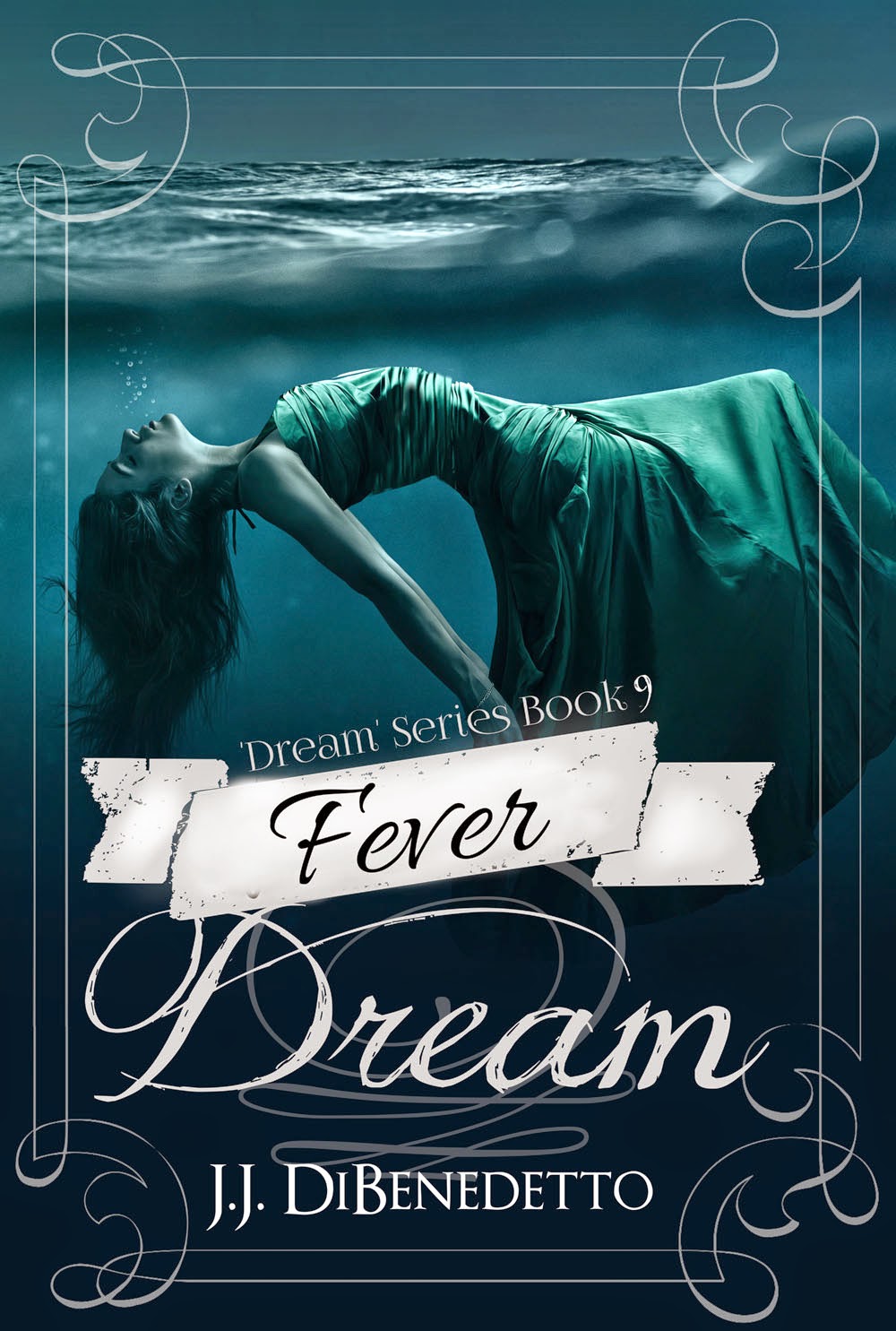 Dr. Sara Alderson isn’t used to her patients dying for no reason. When a young boy succumbs to a mysterious illness that defies all her efforts to treat it, she refuses to accept defeat. After two months of questions, Sara has attracted the attention of powerful people who don’t want their secrets uncovered, and will go to any lengths to make sure they stay hidden. Now, time is running out for Sara to unravel the mystery before anyone else falls victim to the illness. And before her career, her family and her freedom are taken from her by enemies she doesn’t even know she has. Fever Dream is the ninth book of the Dream Series

About The Author:
J.J. (James) Dibenedetto's fans would swear he's got a sixth sense when it comes to seeing into the minds of others and often wonder if his stories could possibly be fiction. He enjoys suspending disbelief with suspenseful paranormal tales that are a perfect blend of reality meets fantasy.
His popular Dream Series continues to delight readers with each and every exciting installment.
Born in Yonkers, New York, he currently resides in Arlington Virginia with his beautiful wife and a cat he is sure has taken full advantage of its nine lives. When it comes to the cat, he often wonders, but then again it might just be his imagination.

About the Dream Series...
What if you could see everyone else’s dreams?  That’s the question Sara has to wrestle with in the Dream Series.  We first meet her as a shy, bookish college student who doesn’t think there’s anything extraordinary about herself.  And then the dreams start…
Over the course of the series, Sara learns to live with these supernatural dreams and all the trouble they plunge her into.  At the same time, she grows from a student to a practicing doctor; and from a single girl to a wife and mother.  But every time she thinks she’s got everything figured out, life – and her extraordinary dreams – teach her that she’s always got more to learn…


College junior Sara Barnes thought her life was totally under control.  All she had to worry about was her final exams, Christmas shopping, applying to medical school – and what to do about the cute freshman in the next dorm with a crush on her.  Everything was going according to plan, until the night she started seeing other people’s dreams.


It’s bad enough that Sara is learning more than she ever needed to know about her friends and classmates, watching their most secret fantasies whether she wants to or not.  Much worse are the other dreams, the ones she sees nearly every night, featuring a strange, terrifying man who commits unspeakable crimes.  Now Sara wonders if she’s the only witness to a serial killer – and the only one who knows when and where he’s going to strike next.
Dream Student is the first book of the Dream Series.
Between adjusting to life as a newlywed and trying to survive the first month of medical school, Sara Alderson has a lot on her plate.  She definitely doesn’t need to start visiting other people’s dreams again.  Unfortunately for her, it’s happening anyway.


Every night, she sees a different person and a different dream.  But every dreamer has one thing in common: they all hate Dr. Morris, the least popular professor in the medical school, and they’re all dreaming about seeing him – or making him – dead.
Once again, Sara finds herself in the role of unwilling witness to a murder before it happens.  But this time, there are too many suspects to count, and it doesn’t help matters that she hates Dr. Morris every bit as much as any of his would-be murderers do.
Dream Doctor is the second book of the Dream Series.
Dr. Sara Alderson can deal with eighty-hour workweeks as a resident at Children’s Hospital.  Dealing with crises in the Emergency Room or the OR is second nature to her.  But now she faces a challenge that all of her training and experience hasn’t prepared her for: Lizzie, her four-year-old daughter, has inherited her ability to see other people’s dreams.


After Lizzie befriends a young boy on a trip to Washington, DC, and then wakes up in a panic that night because of a “bad funny dream,” Sara knows exactly what it means: her daughter is visiting the boy’s dreams.  Complicating matters is the fact that the boy’s father is a Congressman, and he’s dreaming about a “scary man in a big black car” threatening his Daddy.
Unraveling a case of political corruption and blackmail would be hard enough for Sara under the best of circumstances.  But when she has to view everything through the eyes of a toddler, it may be an impossible task.
Dream Child is the third book of the Dream Series.    Dr. Sara Alderson didn’t think she had a problem in the world, when she walked into the office for her first day as a partner in her own medical practice.  And then the police showed up and arrested her for a crime she couldn’t possibly have committed.  Twenty four hours later, after a horrifying day and night in jail, Sara comes home a different – and completely broken – woman.


Clearing her name is her first challenge, but that’s nothing compared to the task of rebuilding her shattered psyche.  And the only way she can do that is with the help of the supernatural dreams, the same dreams that have nearly cost Sara her sanity – and almost got her killed – in the past.
Dream Family is the fourth book of the Dream Series After nearly a decade of visiting other people’s dreams, Sara Alderson thought she had made peace with her supernatural gift.  Until one night, while watching her husband dream, she saw someone else watching him, too: a mysterious woman in a red dress.


The woman in red keeps appearing in the dreams of Sara’s husband and his co-workers.  Sara doesn’t know if this mystery woman is trying to steal her husband, drive him mad or something even worse.  All she does know is that now she has something she never imagined: a nemesis.  And the only thing more dangerous than a nemesis who shares her ability to step into other people’s dreams, is one who knows far more about that ability and how to control it than Sara does.
Waking Dream is the fifth book of the Dream Series.
Dr. Sara Alderson is heading back to college for her ten-year class reunion.  Her husband and two of her children are coming with her – and so are her supernatural dreams.


One of her old classmates is becoming more frantic with every passing night.  Sara can’t see his face, but she can see everything else in his dreams, and he’s coming closer and closer to committing a desperate act to try and save his business.  Sara’s the only one who can save him, and his family – if she can figure out who he is and what he’s planning in time.
Dream Reunion is the sixth book of the Dream Series.
Dr. Sara Alderson thought she was securing her and her family’s future when she moved them to a small town in New York and took a job as Chief of Pediatrics at the local hospital.  Unfortunately, things aren’t going quite according to plan.  For one thing, she has enemies at work who resent her from the moment she sets foot in the hospital.


For another, she’s visiting the dreams of an old man who’s seeing nightly visions of a storm that will wipe out the entire town.  He’s convinced that the visions are true – and as winter closes in, Sara is starting to think he might be right.
Dream Home is the seventh book of the Dream Series.
Thanks to her unique ability to step into other people's dreams, Dr. Sara Alderson has solved murders, unraveled conspiracies and saved lives. But when a crisis hits close to home, even her supernatural gift might not be enough to avert disaster.


On a family vacation to Paris, Sara's fifteen-year-old daughter Grace disappears without a trace. The only way to find her is through Sara's dreams. But her gift has taken an unwanted vacation, and without it, Sara has no idea how to rescue Grace. In a foreign city, with no clues, and her dreaming talent failing her for the first time, Sara must figure out another way to find Grace before it's too late.
Dream Vacation is the eighth book of the Dream Series
Dr. Sara Alderson isn’t used to her patients dying for no reason.  When a young boy succumbs to a mysterious illness that defies all her efforts to treat it, she refuses to accept defeat.


After two months of questions, Sara has attracted the attention of powerful people who don’t want their secrets uncovered, and will go to any lengths to make sure they stay hidden.
Now, time is running out for Sara to unravel the mystery before anyone else falls victim to the illness.  And before her career, her family and her freedom are taken from her by enemies she doesn’t even know she has.
Fever Dream is the ninth book of the Dream Series