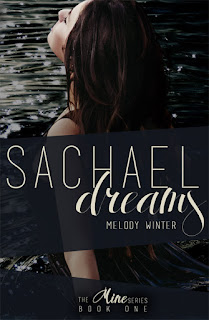 Twenty-two-year-old Estelle Bailey has had enough of busy city-life and her hot-tempered ex. She escapes to the seclusion and peace of her family's clifftop home in Ravenscar, where the soothing solitude whispers to her soul as strongly as the sea itself does. But her newfound contentment is interrupted when a mysterious man-a Sachael, master of seduction-joins her midnight swim unexpectedly. Estelle struggles against his charm and the overpowering attraction she feels for him. He offers her a life she never could have imagined, a life beneath the waves . . . but at what cost? Before she can decide, she's captured, ensnared by the Sect, a secret enemy of the Sachaels, becoming a pawn in a war she knew nothing about. Now, she's left with a new choice-escape the clutches of the Sect and flee into the ocean, or side with her alluring, intimidating captor and destroy the Sachaels forever. Can she turn her back on the man she might love, or will the secret of her heritage change everything? Set against a picturesque backdrop, Sachael Dreams is the first in a new series, exploring themes of romance, love, and identity, and the struggle that happens when all three collide.

First off, I thoroughly enjoyed this book.  Ms. Winter’s style is easy to read with the perfect amount of description. I could see the coastlines, Estelle Bailey’s home, Ravenscar, Robin Hood’s Bay, and the village. The characters were enjoyable and for the most part, rich and complex. I did find myself wishing Estelle was just slightly braver earlier in the story. However, she is a complex character and extremely likeable.
The romance between Estelle and the Sachael is beautifully drawn. The reader can feel the passion and electricity between the two, and I found myself intrigued by this stunning world Ms. Winter has created. And for as much as I love the main characters, Ms. Winter has also written some amazingly wonderful villains. They are horrible, in the best possible way.
The story is a love story, but it has been written with new mythology and original creatures, and is more than just a romance. The complexity of plot, and subplots, is mixed with the undersea world that is laced with the humans of the land thus laying the ground work for an exciting and fascinating series. I read this book in two days and am excited to read the next installment.
My only reason for giving it 4 stars instead of 5, was I felt it could have gone deeper and been grittier, but despite that, it’s fantastic.
Do yourself a favor and read this book, you won’t be disappointed.
﻿