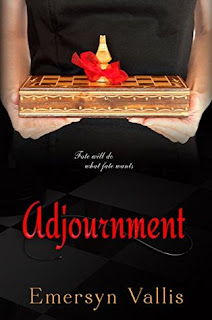 When I chose to leave home I knew what I was giving up. I knew I was walking away from life as I knew it and the plans that we had made. We…us…him and I…
It’s funny to think of him in a different light…or life.
That’s what it feels like, a lifetime ago.
But I’m a different person now. I have rules and goals. And if it wasn’t for my parents' vow renewal I would have successfully evaded him for the rest of my life. This is not by choice, I can tell you that.
I just need to focus and remember the key to this weekend is avoidance…and alcohol. But if anyone can pull that off it’s me,
Sidney Chandler, queen of avoiding anything that will make me feel.
It’s just one weekend, right?
One very long weekend with my family…friends…my sisters and me…together, and our nemeses, the McAllister triplets.
What could possibly go wrong?
Everything.
They say you never forget your first love, now just imagine how hard it is to forget your only.
This is going to suck. 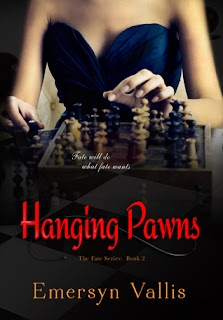 We all have choices in life… paths to take… roads  to follow…. It’s on those journeys that fate finds us and takes us where we need to be… Without a second glance we can be taken away from things we know… "people we love" and given a new life...


One that can change us… save us…

What would you do if fate dropped you at a crossroads? Would you go back? Or would you run like hell the other way? 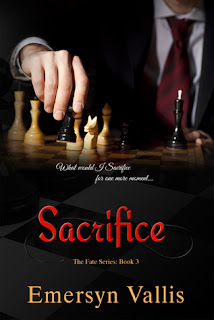 For years my life was in a state of Adjournment…
Fate had constructed a plan to push me away… to save me…
There was a danger I never knew existed, one I had never sensed.
My family positioned themselves around me.
Like Hanging Pawns, they shielded me from it and I lived blissfully unaware… until now.
Now, I know there are rules to this game...
Sacrifices to be made in order to get to End Game.
What would I Sacrifice for one more moment... one last look? Touch? Kiss?
The answer is simple…
Everything. 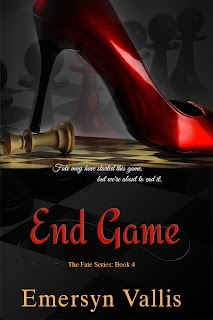 Once upon time, there were two girls living their lives completely unaware of one another and the dangerous game they had been placed in…
Until Fate found them…
Fate saved them, made them stronger & with time, Fate brought them together to become friends rather than enemies…
Until a cruel Queen made her move, threatened the Knight,
And an innocent Pawn was sacrificed…
Now the game is in our hands…
Fate might have set us up for this… but we control the moves now…
And we have our own plan.
Revenge.

"And these two between the sheets, good gracious. It was HOT HOT HOT! The chemistry was undeniable. It sizzled and poured off of the sheets. Simon was a beast." ~ Renee Entress Blog (Adjournment)

“Emerysn Vallis has an incredible writing style, the story comes out smoothly and flawlessly with perfect attention to detail. Her characters are amazing as well, the interactions between all of them are hilarious and the banter is perfect.” ~ The Truth About Fiction Book Blog (Hanging Pawns)

"Emersyn Vallis has done a wonderful job on the Fate Series. Adjournment, Hanging Pawns, and now Sacrifice are definitely in my definite recommend list, and re-read list for 2014/2015" ~ Battery Operated Book Blog (Sacrifice)

"PERFECT ENDING! PERFECT! Of the hundreds of ideas running through my head about how this amazing series was going to end, this was by far the best possible ending and exceeded all of my expectations!" ~ Swoon Worthy Books (End Game) 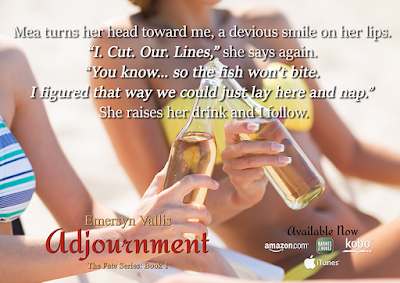 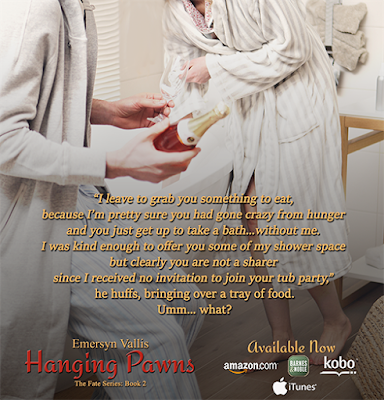 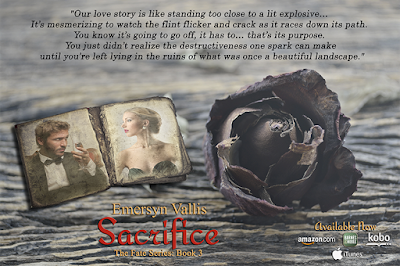 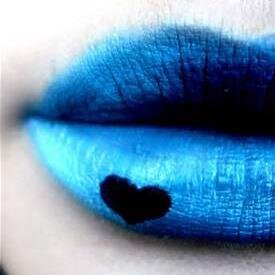 Emersyn Vallis is a first time author with Adjournment being the first book in the Fated Series. Currently residing on the east coast with her husband and three children she is typically mistaken for being quiet and reserved her friends often describe her as a spastic spider monkey and always the first to be there with her quick wit to pull you back up when you’re feeling down. After reading as a hobby for most of her life it wasn’t until she had discovered R. L. Mathewson’s ‘Neighbor from Hell Series’ and Tara Sivec’s ‘Playing with Fire Series’ that she came up with the idea to fuse comedy and suspense together and her passion for writing was born.