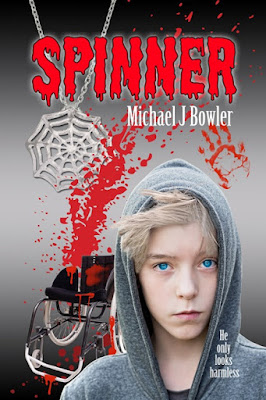 Book Description:
Fifteen-year-old Alex is a “spinner.” His friends are “dummies.” Two clandestine groups of humans want his power. And an ancient evil is stalking him. If people weren’t being murdered, Alex might laugh at how his life turned into a horror movie overnight.
In a wheelchair since birth, his freakish ability has gotten him kicked out of ten foster homes since the age of four. Now saddled with a sadistic housemother who uses his spinning to heal the kids she physically abuses, Alex and his misfit group of learning disabled classmates are the only ones who can solve the mystery of his birth before more people meet a gruesome end.
They need to find out who murdered their beloved teacher, and why the hot young substitute acts like she’s flirting with them. Then there’s the mysterious medallion that seems to have unleashed something malevolent, and an ancient prophecy suggesting Alex has the power to destroy humanity.
The boys break into homes, dig up graves, elude kidnappers, fight for their lives against feral cats, and ultimately confront an evil as old as humankind. Friendships are tested, secrets uncovered, love spoken, and destiny revealed.
The kid who’s always been a loner will finally learn the value of friends, family, and loyalty.
If he survives…
Available at Amazon 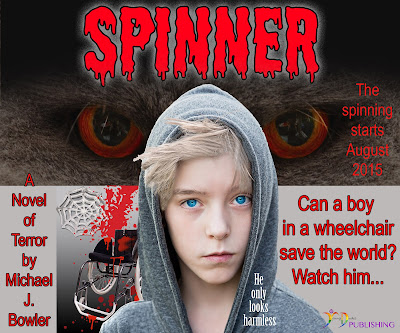 Spinner by Michael J Bowler was a fantastic suspense-thriller.  It is not the type of book I would normally pick up and read but I found myself unable to put it down and here’s why. First the main character and his friends are all in Special Ed. As a Special Ed teacher this makes me giddy. I have worked with “these” boys. The mannerisms, bonds of friendship and the emotions of each kid is spot on. I felt like each boy I had worked with at one point in my career. Spinner is in a wheelchair and has the ability to heal people. Because of this people are after him, wanting to use his abilities for evil.  He also has nightmares which become reality. Reason two is the subtle religious tones in the book. Spinner feels the one man he can confide in is the Catholic priest at the local church. Even he has some changes of the heart as he helps Spinner and his friends solve the mystery of how Spinner came to be. Another is the amazing way the characters deal with one of the boys being “different”. I don’t want to give spoilers so I will just say that the young boy did not need to be afraid to open and share his life. Lastly, and I think the biggest message in the story, is that even though bad things happen to you or in your life does not make you bad. We all have the choice to choose between the light and dark sides, good vs. evil; however you want to label it.  Each sub story in here was intriguing. I wanted to know more about each of the boys that helped him and called him friend.  There are so many great moments in this book that to share would spoil it for you. If this were a movie I would be hiding under a blanket holding my bestie’s hand and a tissue in the other. One moment I was scared, next saddened, and followed by a wash of relief. There are happy and funny moments too, so don’t worry, but have your blanket and tissue close and a mug of hot tea. I will read on, I want to know what happens to Spinner and his friends. 5 stars

Spinner by Michael J. Bowler is an exceptional roller coaster of a book. It’s been a while since I’ve read any YA, but this book was fantastic.
Our hero is a boy named Alex. He has spina bifida, is in Special Ed and has to live in a foster home run by an evil hag. He is extraordinary. Bowler has given him the angst and fears of any teenager, but a charming depth and poise we all hope our children will have. He is surrounded by his friends, an eclectic group of boys also in the Special Education program at his school. Each one is different and exceptional.
I really enjoyed the paranormal and religious mythology of this book. It took and original concept and wove it intricately through a variety of well-known religions. I loved that the boys had limitations, not just Alex’s spina bifida, but their mental restrictions, and still managed to find a way to understand. Not just one another, but whatever was thrust at them.
This is a YA book, but it is gritty and real and not for the faint of heart. There is danger, adventure and evil… real evil. The characters are fantastic, and the relationships intense.
I couldn’t put this book down. I read it in about 12 hours, and had to force myself to go to sleep. If you are looking for a adventure, mystery full of depth and originality, this is the book for you. 5 stars! Can’t wait to find out how the journey continues! 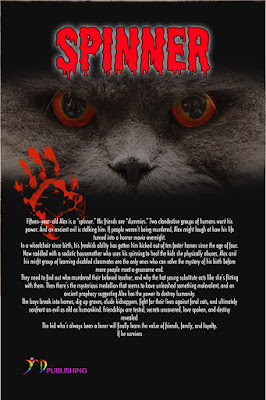 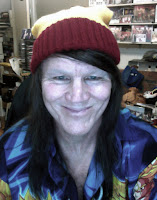 Michael J. Bowler is an award-winning author of eight novels––A Boy and His Dragon, A Matter of Time (Silver Medalist from Reader’s Favorite), and The Knight Cycle, comprised of five books: Children of the Knight (Gold Award Winner in the Wishing Shelf Book Awards), Running Through A Dark Place, There Is No Fear, And The Children Shall Lead, Once Upon A Time In America, and Spinner.
His horror screenplay, “Healer,” was a Semi-Finalist, and his urban fantasy script, “Like A Hero,” was a Finalist in the Shriekfest Film Festival and Screenplay Competition
He grew up in San Rafael, California, and majored in English and Theatre at Santa Clara University. He went on to earn a master’s in film production from Loyola Marymount University, a teaching credential in English from LMU, and another master's in Special Education from Cal State University Dominguez Hills.
He partnered with two friends as producer, writer, and/or director on several ultra-low-budget horror films, including “Fatal Images,” “Club Dead,” and “Things II,” the reviews of which are much more fun than the actual movies.
He taught high school in Hawthorne, California for twenty-five years, both in general education and to students with learning disabilities, in subjects ranging from English and Strength Training to Algebra, Biology, and Yearbook.
He has also been a volunteer Big Brother to eight different boys with the Catholic Big Brothers Big Sisters program and a thirty-year volunteer within the juvenile justice system in Los Angeles.
He has been honored as Probation Volunteer of the Year, YMCA Volunteer of the Year, California Big Brother of the Year, and 2000 National Big Brother of the Year. The “National” honor allowed him and three of his Little Brothers to visit the White House and meet the president in the Oval Office.
He is currently working on a sequel to Spinner.
His goal as a YA author is for teens to experience empowerment and hope; to see themselves in his diverse characters; to read about kids who face real-life challenges; and to see how kids like them can remain decent people in an indecent world.