Never Before Released
The Shift
Emily Walker
Ty Monroe has finally made police officer and is ready for his first night on the job. As a shifter he's well aware of what goes on in the secret world of Anchor--but nothing has prepared him for the Shift of a full moon. It's going to take all his wits and powers to survive the night...
Goodreads
SHIFTED
#99c
Available now on Pre-order
Amazon US
Amazon UK
Kobo
Smashwords
Nook - coming
Apple - coming

Ty's on call phone buzzed so he moved outside to answer it. The noise of the bar was mind numbing. He felt confident Mary wouldn't use her shotgun after his amazing pep talk. There was no time to pat himself on the back because Todd Ansley was yelling as soon as he answered.
"You have to get down here to Wally's and get Hank."
"Okay, why do I need to get Hank. What's the problem?"
"He's shifting all over the place."
Ty was having a hard time hearing over the gaggle of smokers on the porch, "shitting?"
"No shifting, Hank don't you fly up there you jack ass, just get down here Ty hurry." The line went dead. It was going to be a wild evening. 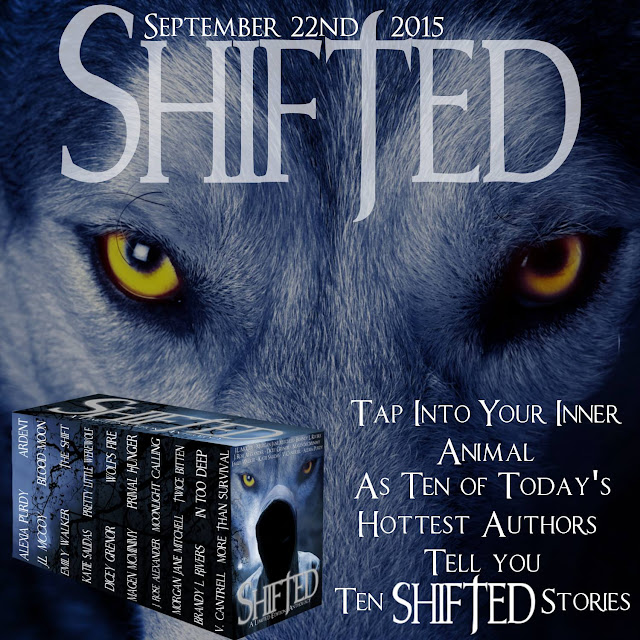 10 of Today's Hottest Authors Tell You 10 Shifted Stories★
Blood Moon (SMVS, #5.5) by J.L. McCoy
Nikki St. James' life changed when she was kidnapped by vampires, and Dean Cruz, local werewolf alpha, might just be what she needs to pick up the pieces of her broken life.
Pretty Little Werewolf by Katie Salidas All Giselle Richards has ever wanted was acceptance for what she is, a werewolf. But acceptance comes at a price.
Wolf's Fire by Dicey Grenor At the end of times, full of torment and tribulation, the world needs Punch, a man driven by purpose, love, and loyalty, even though he arrives...in the form of a beast.
Primal Hunger by Magen  McMinimy Can a werewolf ever truly trust a vampire? Follow Andre and Savannah as they struggle with love, loss, betrayal and unexpected friendships.
Moonlight Calling by J. Rose Alexander When Melissa Donnelly discovered the stalker's note on her table, she never expected her knight in shining armor would show up in the small, furry shape of a house cat named Alistair Meowly...
In Too Deep by Brandy L Rivers Werewolf crashes into druid. Sparks fly. Can they resist their chemistry long enough to survive Shadowstalkers.

The Shift by Emily Walker As a shifter Ty Monroe is well aware of what goes on in the secret world of Anchor--but nothing on earth could prepare him for the shift of a full moon.