Blog Tour: At The Sharp End of Lightning by N.R. Bates 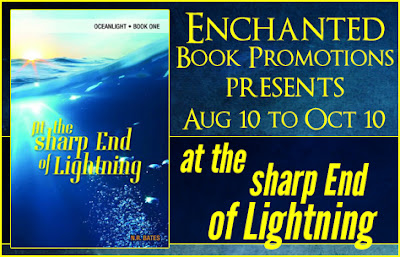 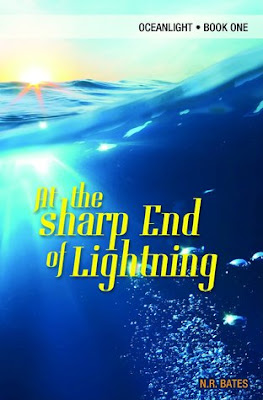 
AT THE SHARP END OF LIGHTNING. The interwoven fantastical tale of family, of loss and sacrifice, of unexpected gifts and coping with disability and new abilities set against the backdrop of climate change occurring across parallel worlds. In Oceanlight, Yalara Narika, a winged Sea Sprite, searches for her lover over immense seas only to find catastrophe and realization that her world is in turmoil. Meanwhile in the safe suburban normality of North Wales, Einion Morgan Alban, a restless youth afflicted by a disease of the blood, is nearly murdered by a man in a white suit. Yalara and Einion must discover the causes of their near-deaths and their as yet unrevealed connections as they both face upheaval to their lives and their worlds. Book One of the OCEANLIGHT series.
Author Bio
NR Bates was born in London, grew up in Wales, and lived in Canada and Bermuda. He shares his life with his wife and his house with seven cats, one dog and the subtropical wildlife of lizards, wolf spiders and ant colonies that seek out a better life indoors. He is an oceanographer and scientist, and has published more than one hundred and thirty scientific papers on ocean chemistry, climate change and ocean acidification. 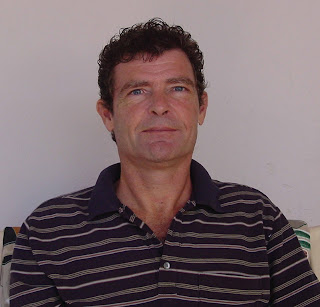 He is a Senior Scientist at the Bermuda Institute of Ocean Sciences and Professor of Ocean Biogeochemistry at the University of Southampton, UK. His novels focus on epic fantasy and magic realism, and inspired by his deep love of the ocean and environmental sciences. He has also recently published a small book of short-stories set in Paris, entitled “The Fall of Icarus (The Elevator, The Fall of Icarus, and The Girl)”.
Excerpt
Authors note to the reader: In the first chapter of the book, Sea Sprite Yalara Narika searches for her missing lover and kin. She is a keen observer of changes in her world…she lives at sea with her family.
Unbidden thoughts intruded and interrupted, and the continuity of the moment subsided. The foreboding nature and seriousness of her mission had emerged from the deeper recesses of her mind. The rapid beating of her heart slowed, as did the pace of her breath. Her sense of time quickened perceptibly. She scrutinized the far-reaching seas that stretched out below—the comforting embrace and security of that expanse of her world, Oceanlight. She had a past and a future again.
An insistent memory of a wise voice intruded on her blissful flight. “You must find the disappeared!”
“I will, I promise,” Yalara had said.
Yalara had sensed the deeply concealed anxiety in the directive, and it reinforced her deliberate search for kin. “I do have my own purpose,” she admitted to herself. She was searching for someone she loved—or at least could love.
That concern layered itself amidst the recent flush of rumour and disquiet—among the astute few—that the seas were changing. Yalara recollected a confidence she had shared with a wiser Sprite: “It’s almost imperceptible how the stirrings of the atmosphere, the waftings of the sea’s breath, and chemiae of the water have altered.”
“They have altered nonetheless. But these are hints that most are unaware of,” came the sure response.
Yalara considered herself for a brief period, staring at her hands, which had an unwavering surety of grip upon the harness and petrel. “I am Yalara of the Narika.” Her sea tribe, the tribamare as some called it, was known as the Narika—her clan of Sea Sprites. Yalara had other, less frequently used, formal names that reflected her lineage and her allegiances, such as Yalara ex Teniaka. She did not bear the name of her birth mother, a Sprite of mystery, who had died without giving her a name. It had initially marked Yalara as different, as a youngling, but it had been many years since anyone had mentioned her opaque origins.
She took a deep breath of the salty air, held the inrush for an extended time, and then exhaled with a sigh, while stretching her limbs against the natural synergy of motion between Sprite and bird—between Rider and petrel. She knew that he had sensed her incongruous and discordant movement. He uttered a quiet caw. In response, she eased her charge directly into the wind and held her head and body tightly against the feathers of the bird. Together, they flew downwards and then low, just above the waves, where a fine mist of sea spray hit the Sprite’s face. Yalara knew the bird also sought out that feeling of motion and life. Banking upwards in a buffeted arc and turning to catch the tack against the wind again, Yalara and her petrel caught the strong uplift above the boundary layer and then continued onwards towards the waning sun. ﻿


Interview
RIU: Hi, Nicholas! Welcome to Rising Indies United. Please tell us a little bit about yourself.
First of all I’d like to thank you for inviting me to connect with readers on your site during the book tour.
So…who am I? Hmm. How do I see myself and how do others see me? I am a quiet person, introspective and introverted, and a keen observer of people and place. I also was born with severe hemophilia… like one of my characters. You adjust and I am highly influenced by the condition but not defined by it. I have a very strong will, willful and driven if you like, so I tried to never let my health issues affect what I wanted to do in life. So in a sense I tried to transcend disability (apart from some practical constraints and limitations) and it made me a better and more empathetic person. How do others see me? I am a scientist and have been very successful as an oceanographer and researcher into how climate and environmental change influences the ocean. I also teach and mentor graduate students and this is when the real passion and excitement for science comes to the fore. I do a lot of lecturing and public speaking, and the extrovert spills out…its like acting.
All these things and more have molded me and helped me write fiction.


RIU: When did you first begin writing? Did you find it daunting or did you just jump in feet first?
At The Sharp End of Lightning is my debut fiction novel, although I wrote the second book in the series “The Gathering Places” at the same time. I’ve also published a collection of short stories this year…a fun experience for me. I started writing fiction seriously about two years ago, and jumped in feet first. I wrote stories, poems and songs full of angst as a teenager but my creative side was suppressed for many years while pursing a career as scientist. Writing scientific papers has a very constrained, technical and proscribed approach as it an imperative to communicate results and ideas to the community of scientists in a deliberate and objective manner. This apprenticeship served me well and it was fantastic preparation for returning to fiction. It was not daunting at all but novels require lots of research and much perseverance during a long and protracted editing process. I continue to learn as I write and strive to improve the craft of writing.
RIU: What inspired you to write At The Sharp End of Lightning?

The inspiration for the Oceanlight series comes from my career in science and research on ocean ecology and climate change. I felt that I needed to write fiction that addressed these serious planetary issues. The series is also based on loss and sacrifice within family relationships, and dealing with both disability and ability. Thus it delves deeply into my love of the ocean and also the Celtic history and stories of Wales.
RIU: Who have been your biggest supporters?

My biggest supporter is my wife, partner and soulmate. She really encouraged me to start writing…to finally do something for myself and to let the proverbial genie out of the bottle. Without her my books would not exist. I’ve also had great support from an author friend of mine, SJ Parkinson, who has been incredibly helpful, particularly in the earlier stages of writing. I’ve also had fantastic help from editors at Red Adept Publishing, and wonderful advice from book tour hosts. What has also helped is the feedback from reviewers of the book, especially when they really got what I was trying to achieve.
RIU: What is the hardest part of writing? What is the best part?

Carving out time from all the other things one has in life is the hardest part. Writing takes time and requires sacrifices. It’s a big time commitment…for oneself and for your partner and family.
The best part is the process of writing itself, creating narrative and dialogue, and getting invested in your characters. The fictional people in the novel have to become real.
RIU: Who has been your biggest influence?

For writing…probably Mervyn Peake. For painting…probably Frida Kahlo for the intensity of her self-portraits. For architecture…probably George Washington Smith.
RIU: What is your writing process?

I like to write in the daytime, and work on corrections in the evening. I tend to write in pulses…episodically… as I have to also continue with a science career. If I was writing fiction full-time, I would write regularly, every day, and if not, at least be thinking about ideas, characters, etc.
RIU: What advice would you give a new writer?

I still feel like a novice and perhaps this feeling will not go away. I think the best advice I had was to take the plunge, write and see how your early stories develop. Reviews of early drafts from people whose opinions you trust is important. Don’t be discouraged by the first draft. It is a work in progress and perseverance is the key. Writing takes a long time and you have to be prepared for lots and lots of edits. But keep at it as the story will refine and improve with time.
RIU: If you could have dinner with any 5 writers (dead or alive) who would they be and why?

That is a very difficult question. Dylan Thomas…for his poetry and carousing nature. Virginia Woolf, for her insights on the Bloomsbury set, and views on modernism Mervyn Peake…for Gormenghast, alone, never mind his wonderful illustration.. Iris Murdoch and Simone de Beauvoir… for their insights into the human condition and philosophy.
RIU: What can we expect from you in the future?

I am working on an adult literary novel that is focused on architecture, history and the Greek Islands…and a couple of characters faced with difficult choices. At the same time, I’ve fleshed out the strawplan for a short childrens’ book. I have no idea which story I’ll finish first, or when!
RIU: Thank you for taking the time to talk to us today. Much continued Success!

Thanks again for letting me talk with you today