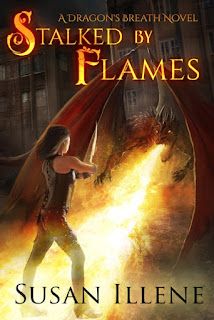 Bailey Monzac has just graduated college and is leaving town for her parents’ ranch in Texas when a massive earthquake unleashes the unthinkable on the world: fire-breathing dragons.

Chaos erupts as people flee for their lives, and Bailey survives only because she is somehow immune to the dragons’ flames. In the midst of the mayhem, Bailey is helped by a shape-shifting dragon named Aidan, who recognizes Bailey is a dragon slayer and will be an essential ally in the power struggle between—and within—the dragon clans.

Natural disasters intensify and dragons lay waste to the world as civilization all but collapses amid the loss of electricity and running water. Roving gangs prowl the debris-filled streets, and Bailey and her friends manage to find refuge in the university library. As her relationship with Aidan deepens during private training sessions, Bailey must learn to harness her newfound skills or see everything she knows and loves destroyed.

Stalked by Flames is a gritty urban fantasy about a woman’s journey into a dark new reality she never could have imagined.


Excerpt:
The dragon stomped toward me on all four legs, steam puffing from his nostrils. His nose was as big as both my fists put together. I grabbed a brick off the ground and clutched it in my hand. Maybe I should have tried to run—a normal person would have—but being attacked by dragons had spiked my adrenaline.
Whenever that happened, it was as if another side of me took over. I became someone who fought and stood her ground. More than once my stepfather had marveled at my ability to compartmentalize fear and think clearly when in danger. My mother hated it. She feared it would get me hurt or killed someday.
I grew up on a ranch outside of Dallas where we had a lot of land. When I was ten years old, I’d decided to go out fishing by myself. Along the path to a nearby pond, I stumbled across a rattlesnake. Most people would have run screaming, especially a girl my age. I chucked a heavy tackle box at the thing. That didn’t kill it, of course, but it immobilized the snake’s body long enough for me to beat it to death with my fishing pole.
That’s how my stepfather had found me. Hovering over a mangled snake and pondering whether to get my tackle box back. It had blood and guts all over it. Killing a poisonous snake was one thing, touching icky stuff was another.
Now I had an honest-to-God dragon coming at me and once again I refused to panic. I needed to weigh my options. With my back against a wall, there was nowhere to go before he’d reach me, but there had to be a way out of this mess. Did the dragon have a weakness I could exploit? Something to buy me time until I could get to a safe place?
I glanced at my brick—it was all I had. A heat-seeking missile would have been preferable, but no one had told me we were about to get invaded by mythical beasts, so I didn’t have one on hand. I looked up at the sky and wished a bolt of lightning would strike my opponent. The storm wasn’t close enough to make that a possibility yet. Not that I’d get that lucky.
The red-scaled dragon lumbered closer, less than ten feet away. His gaze still didn’t show any signs of wildness or rage in it. The tilting of his head made me think he was curious more than anything. It’s what stayed my hand as he lowered his head to sniff at my legs. The heat emanating from his breath warmed the skin on my calves.
I stared down and noted once again that my jeans had been burned off to my upper thighs. The sandals I’d been wearing earlier were missing, too. How had I lost half my clothes? There weren’t any signs of burns, only scratches and bruises.
The dragon inspected all of this as his head inched upward. His hot nose tickled the skin of my thighs and he let out a puff of steam near my crotch. Okay, that was just a little too uncomfortable. I smacked his nose.
“Back off!”
He shook his head and let out a snort, then reared onto his hind legs. Flames licked up his body, consuming him. Standing only three feet away, there was no escape from the heat. I scrambled along the wall sideways, putting as much distance between us as I could. What had just happened? Did smacking dragons in the nose trigger some weird reaction?
The flames narrowed and became brighter. Then a dark shape emerged within them that had me tripping over my own feet to get away. It looked demonic—like something straight out of Hell. There was standing my ground and then there was being stupid.
I spun on my heels and took off down the sidewalk that lay between the library and the building next to it. A growl echoed down the corridor—a really angry one. I passed by bushes and benches that provided no cover from a menacing dragon and kept going. There were plenty of paths to take up ahead if I could just get past the library. The damned building seemed to extend forever.
Through the racing of my heart, I caught heavy footsteps behind me. They didn’t clomp the same way as the dragon’s and sounded more like boots on pavement. Glancing back, I saw a man with feral yellow eyes wearing strange clothing. The red dragon was nowhere to be seen. Shivers raced down my spine as I realized this guy’s attention was focused solely on me and he was racing toward me fast. Where had he come from?


About the Author:
Susan Illene served in the US Army for eleven years and worked as a human resources specialist and an Arabic linguist. She served two deployments to Iraq, and after leaving the army, she studied history at the University of Oklahoma. 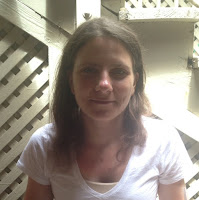 She and her husband currently live in Oklahoma with two high-maintenance cats doing their best to help her write her books.
Links:
Website / Facebook / Twitter / Goodreads 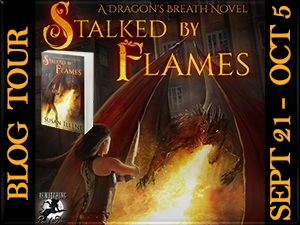