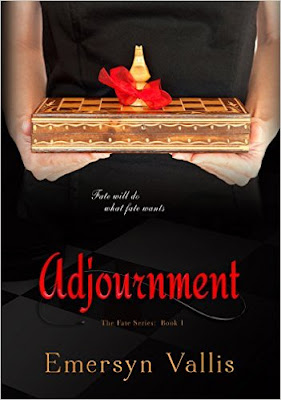 When I chose to leave home I knew what I was giving up. I knew I was walking away from life as I knew it and the plans that we had made.
We…us…him and I…
It’s funny to think of him in a different light…or life.
That’s what it feels like, a lifetime ago.
But I’m a different person now. I have rules and goals. And if it wasn’t for my parents' vow renewal I would have successfully evaded him for the rest of my life. This is not by choice, I can tell you that.
I just need to focus and remember the key to this weekend is avoidance…and alcohol. But if anyone can pull that off it’s me, Sidney Chandler, queen of avoiding anything that will make me feel.
It’s just one weekend, right?
One very long weekend with my family…friends…my sisters and me…together, and our nemeses, the McAllister triplets.
What could possibly go wrong?
Everything.
They say you never forget your first love, now just imagine how hard it is to forget your only.
This is going to suck.

Adjournment by Emersyn Vallis is a first person story told through the eyes of Sidney Chandler. It has been ten years since she has returned home to the Hamptons and spent time with her family. Now, for her parents’ vow renewal, she is forced to face memories that she has suppressed all this time. Along with her twin sisters, and the McCallister brothers, she will be pulled down the dark road of memories that she never wants to see again. The siblings of these two families have been competitive at best and have turned revenge into a sport, constantly trying to outdo each other. Even the girls’ uncles get in on it and throw their own nieces into the pool. Literally… these families are putting the “fun” into dysfunctional. A game of paintball turns into an all-out war. For me, the scheming seems a bit much and borders harassment but all the characters seem pretty okay with it.
The story reads as fragmented at times, but as I read on I realized that we are following the thought patterns of Sidney, and she has many thoughts at one time and doesn’t always complete them. Now there is talk of fate throughout the story, but not sure how it ties into chess. Yup, chess. A few chapters in Sidney is given a chess piece, one of her own. She thinks it odd, momentarily, and then no talk of it again until close to end of the book. I was curious about it and wanted to know more, but it got pushed aside. Then, even when it came back up, I felt like I was left hanging and wondering about the tie in. Unfortunately, Sidney was not as curious as me. She was dealing with her memories of once being in love and then having given up all hope of ever loving again. Boys interrupt everything. The McCallister Brothers are good at that. Then there is also talk of the neighbors. Sidney sees a mysterious figure at the empty house. Not sure what that was all about either. Hopefully, book two will have more clues on both these topics.
My favorite character was Grams. She is a feisty old lady who loves her drinks. Irish cream on ice, also my favorite, or whatever she can get her hands on. She tries to help everyone with her words of wisdom, that often sound a tad off beat, but that’s what makes her a cool grandma.
The story was interesting. There was some mystery to it even though it seemed to be forgotten about at times. Well, I didn’t forget, but Sidney did. She also tended to forget about her friends that she brought along on her trip. That drove me nuts on a personal level. Who takes their friends on vacation and then ditches them? This story was a whirlwind of craziness. Sometimes it was fun, other times it was frustrating. It is about a lifestyle I am not used to and made me think of reality shows like: Keeping up with the Kardashians, Big Brother and Survivor all rolled into one.  It was a quick read and entertaining but not feeling the need to continue with the series.