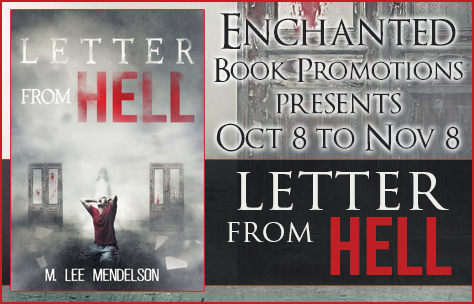 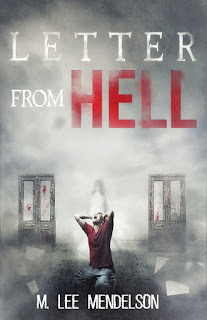 A simple, routine call to 911 unexpectedly erupts into a grisly suicide. Mike, a well-seasoned deputy is uncharacteristically disturbed by the gruesome scene. Who was this tortured soul, and why did this happen? Innocently, most of us accept our destiny. We assume our life experiences are the result of mere chance. Few of us discover that our fate is actually an orchestrated tapestry woven from beyond our world. When that influencing weaver is from the netherworld, you may likely find yourself on a dark, terrifying, and tragic journey.

What if you discovered a letter penned by a desperate soul from beyond the grave, a literal letter from hell? What if that letter could alter your perception of reality by revealing that you are not in control? Would you dare read it?

Author Bio
A first time author, M. Lee Mendelson and his wife Yvonne have six children between them, three boys and three girls. Yes–the Brady Bunch. He was inspired and encouraged by Yvonne to write his first book after he proposed the concept to her. M. Lee never dreamt of writing anything before his first book, but has now discovered he has a passion for writing, with one idea after another pouring out of him. A rare native Floridian, M. Lee recently retired from a career as a full-time firefighter and part-time law enforcement officer. His twenty-six years of experience on the streets have given him a vast array of experiences; some good, some bad. His recent retirement allows him much more freedom to dedicate to his newfound obsession with the written word. His first book, “Letter From Hell,” is a complex horror novel with a little something for everyone M. Lee’s real-life experiences, coupled with an active and vivid imagination, allow his stories to come alive. Striving to paint pictures with words, he immerses the reader into his scenes. His ambition is that people will enjoy reading his work and deem it worthy to recommend to others.