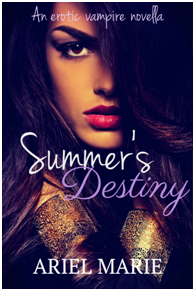 The hunters came in the middle of the night. Killing every vampire in sight. Their screams still haunted her. Summer Rayne was one of the lucky vampires to escape the massacre. She did what every other vampire had been doing for the past decade— she ran. She ran as fast and far away as she could, not knowing that destiny would lead her to her future.

He failed his people. Vampire king Ryan Valerian lived in his own personal hell for years. Vampires were no longer the top of the food chain— they were now the hunted.  The hunters wanted to eliminate the vampire race, killing them as they hunted them down. Ryan did as other vampires did— he ran. He remained hidden until destiny presented him a small curvy vampire that blew into his life like a hurricane.

Their meeting was destined. Their love was instant. Their chemistry sizzled. Summer was convinced that the vampires would once again rise but would her love be enough to convince Ryan to be the king he was destined to be?

Finding an unconscious female on his private property was odd. Having to fight an animalistic attraction to the unconscious female left Ryan Valerian speechless. Soon the curvy vampire would turn the missing vampire king on his ass. 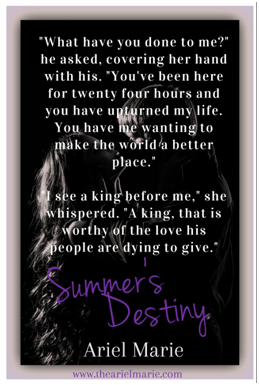 “It’s okay,” he said, his dark eyes remained on her as she stood to make her way to him. “My blood will give you back the strength you need and more.”
Summer trembled on the inside. She knew that she needed blood from the starving pains she experienced in her abdomen. She knelt at his feet as he offered her the sustenance that they both knew she needed.
She was still in awe that it was the long-lost king that was her rescuer. It had been ten years since he was last seen. Everyone knew of the Valerians and their role in leading the vampires. He was the last of his family and in order to save their race, he would need to come out of hiding.
He presented his wrist as her gums burned from her fangs descending. She gripped his wrist and brought it to her lips. Her incisors pierced his flesh, taking in his coppery nourishment. The taste of his blood was sweeter than regular blood and gave her an instant power rush.
Her body flushed as she swallowed his royal blood. Her breaths came in rapid succession as she continued to feed from him. The pains disappeared, her head no longer ached, and the small lump at the base of her neck was no longer present, as her body finished the healing process. She sat up on her knees, gripping his wrist tighter as the need to consume him filled her.
“That’s enough, Summer,” he gasped, sitting back into his chair. He pulled his arm away, leaving her wanting more.
She gasped for breath, trying to get control of herself. He may have healed all of her aches and bruises, but now, she was left still very much aroused with a pulsating pussy that was aching for release. She gripped his leg as her eyes traveled up his body, finding that he was just as shaken as she was. 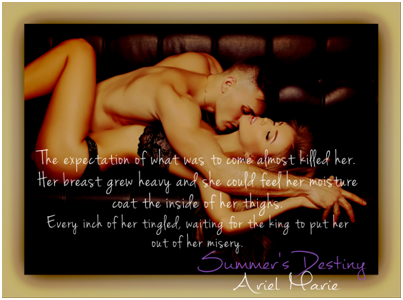 Copyright © 2016 by Ariel Marie
No part of this book may be reproduced in any form or by any electronic or mechanical means, including information storage and retrieval systems, without written permission from the author, except for the use of brief quotations in a book review. 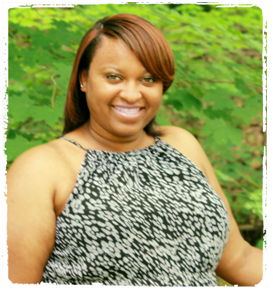 Ariel Marie fell in love with books at an early age. She can remember her first favorite book. She read the book so many times that it fell apart and she was devastated! Fast-forward thirty years later, Ariel now writes books she hopes readers will fall in love with and read over and over. Paranormal romance is her favorite genre. Who doesn’t love Shifters, Witches, Faes and all the other paranormals? She just loves writing about couple’s first meeting, the magnetism of when their eyes first meet and the first kiss! Her favorite part of writing paranormals is creating the world that the characters live in. 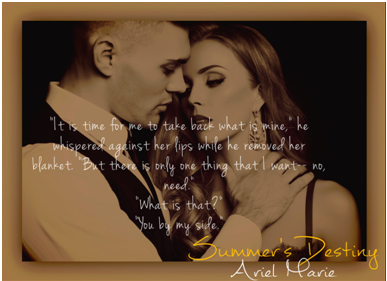 Ariel Marie Newsletter
Ariel Marie loves connecting with her readers. Once a month she personally writes her newsletter for her readers. They are one of the first to learn about book releases, contest and events that she is participating in.
Sign up here: http://www.thearielmarie.com/#!contact/c1kcz 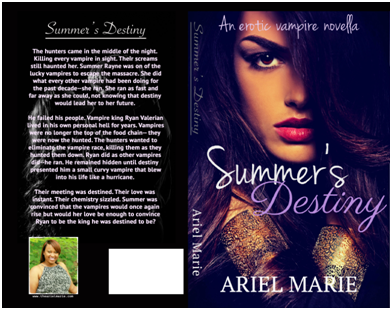 a Rafflecopter giveaway
-----
Posted by sldearing at 5:00 AM