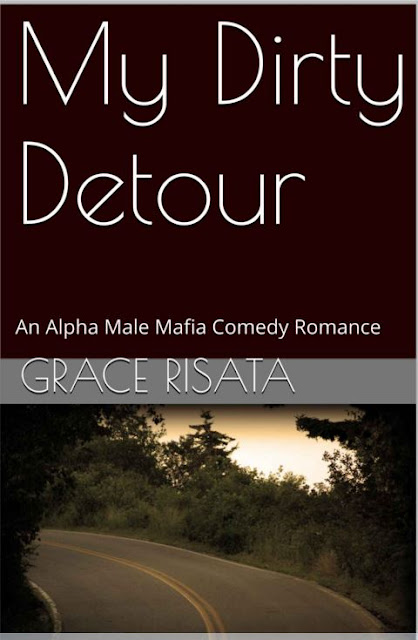 A dominant leader flees the mafia, looking for a fresh start in a small town. He put all his effort into starting a business and resigned himself to a life without love. A neurotic germaphobe lives vicariously through the books she reads, preferring to play it safe in real life and hide behind her sarcastic remarks. “I am NOT that neurotic! I just have germ issues and I tend to over-analyze things. Sure, I second guess myself all the time and have a tendency to freak out over the small stuff. I’ll admit that I do ask a lot of “what if…?” questions. Fine. I’m neurotic.” One fateful day, the simple act of taking a wrong turn leads Violet right into Rocky’s life and completely turns it upside down. Accustomed to his orders being obeyed immediately and without question, Rocky doesn’t appreciate Violet challenging his authority at every opportunity. “I don’t like being told what to do. Especially when some arrogant tough guy thinks he can boss me around. I might have argued with him just to keep him close. He smelled like heaven. Although with a body like his, I knew he was no angel. Violet charmed her way into his heart with her quick wit and stubbornness, causing Rocky to fail at his many attempts to resist her. “He’d never met anyone like me before. I trash talk, curse like a sailor, and pretty much say whatever’s on my mind. Life is too short to pretend to be something that you’re not.” Rocky tries to keep his violent past hidden from Violet, but it suddenly catches up to him and he can no longer deny who he really is. Will Rocky turn his back on the life he built or stay and fight for what’s his? When Violet is faced with situations that rival anything she’s merely read about, will she be able to face her fears and work together with Rocky or will the truth tear them apart? “It’s one hell of a wild ride! Take a look inside the first few pages and I’ll tell you all about it.” Follow the journey of Rocky and Violet as they take a dirty detour…
Please note: As is often the case after “Boy Meets Girl” but before “Happily Ever After,” Steamy Bedroom Scenes will occur. Well….some of the steamy scenes actually take place outside the bedroom. You’ll have to read the book to find out more! This is a full length, stand-alone novel with no cliffhangers.

I haven’t wanted to jump in and hang out with characters in a book in a while. My Dirty Detour by Grace Risata is the kind of story that makes you want to be a part of it. I want to go to Sunday dinner and hang out with the cast of crazies. Yes, I mean crazy. You wouldn’t think that these people would ever hang out with each other but they make a fascinating, dysfunctional family to replace their already dysfunctional family. It reads first person from the eyes of Violet, who has been down on herself for her boring and neurotic life. A wrong turn into a brewery turns her life upside down and it is thrilling. These gangsters turned good ol’ boys are hot and you’re going to have a hard time figuring out which one is your new book boyfriend. Violet’s love interest Rocky is cool, but I think my pick is Dmitry. Now, normally I hate when a first person story switches to third person. It pulls me out of the story when it goes back and forth to much. Risata did a great job of only switching a few times to third and italizing it, so me, the reader, didn’t get confused as to how Violet knew all the stuff that happened behind her back. The book continued to flow nicely between the changes. Also the girl writes some steamy sex scenes without being too flashy with innuendos or cutesy names for body parts. I have to admit, I craved Italian food, mainly pasta, and really want to try Russian Honey Cake. I like a story that has good romance and good food. When I read about characters who like to eat and tell you about all the amazing dishes they are enjoying, it makes the story more real and comes to life for me. I can see myself sitting down and breaking bread with these people or maybe just my BBF.

Grace Risata is a new addition to the literary world.   Grace is very excited to share her first novel,  My Dirty Detour, and she hopes you enjoyed reading it as much as she enjoyed writing it.  Grace would like to thank everyone for giving her book a chance and she welcomes all feedback.  Grace is happiest when reading, eating Portillos hot dogs, and patiently waiting for the inevitable zombie apocalypse.