Review: Cockswords & Berries: A tale of kings and maidens by The Royal Scribe 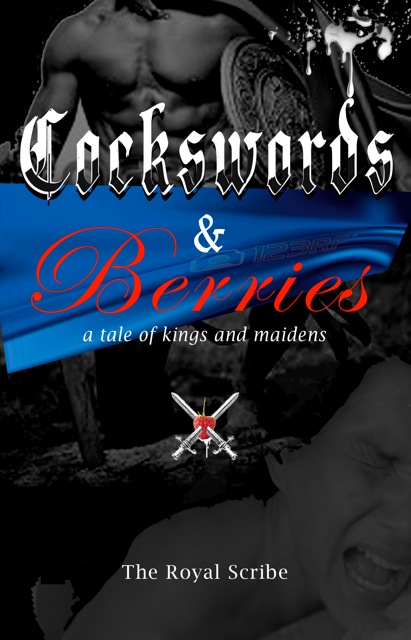 Cockswords & Berries: a tale of kings and maidens
by The Royal Scribe

After a chance encounter and unlikely romantic audience with the King of Rivasor, a nubile young waif of peasant bloodline becomes the first and only bed maiden to make the virile and famously well-endowed monarch climax during bedplay. Many admire her talent. Others envy her stain. Some fear her power over the throne. She must be wary no one discovers her own dark secret in the turmoil that ensues! stain – v. informally, to ejaculate onto another’s skin; n. the visible mark roused by such contact. See THE ALCHEMY OF STAIN When a Rivasoran man’s semen makes contact with a woman’s skin (on any part of her body), a unique mark—a stain—appears on her forehead within one to two hours.Elders in the community know who is mating with whom, for they can recognize, for instance, the stain of the blacksmith’s son (or the blacksmith, himself!) on the seamstress’ daughter.As for the royal stain, few people know what it looks like, and even fewer have actually seen it carried—for kings are forbidden from spewing their kreem as long as they hold the throne. Therefore, to carry the King’s stain, as bed maiden Reina now does, is cause for much whispering and finger pointing among Rivasor clusterfolk, NOTE: In Rivasor, to be stained is to carry the stainer’s creative power upon oneself. It is a public declaration of a man’s potency and a woman’s desirability. The stain remains visible for approximately forty-eight hours.

Cockswords and Berries by the Royal Scribe. This book is unique in the way that it was written. The language was fine, I enjoyed the renaissance feel of it, but the way it comes together was not as strong as I would have liked. First, the book opens with the plot, cast of players, the prologue and then a welcome by the scribe. I felt as if I were getting ready more for a Shakespearean play and not settling in for a good read. Next was a dictionary of words. This makes me feel as if the writer did not think the readers would be clever enough to understand what was being said. Nine pages of dictionary terms I felt was unneeded. His writing should help carry along if the words were to foreign to the reader but I think we can all get the jest of a man’s cocksword and a woman’s berry without the dictionary.

Now, the tale of the young maiden becoming the king’s bed maiden was hot and an enjoyable story. I liked the fable itself and all that the maiden had gone through all for the love of her king. Unfortunately, the story would switch between first and third person, which for me pulls me out the story. I was never sure exactly if it was the royal scribe in first or that of the maiden.  A few times there were sections that I though was a conversation between two people but I was not sure. Each paragraph would be in quotes but who was saying it I am not sure. The other thing that bugged me was that the King had no name. Everyone else had a name, why not him? He was simply, the King, who also never spoke a word in the entire story. Were we not to get attached to him and only see him as a sex object? Which the boy has some moves, ladies. Read those parts out loud to your mate and see if things get spicier in the bedroom for you.  There is a sweet and sexy story in there, it was just hard to follow at times.