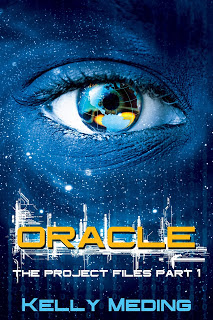 OracleThe Project FilesPart 1Kelly Meding Genre: Contemporary SFPublisher: Smedge Press Date of Publication:  July 18, 2016ISBN: 978-0989918848ASIN: B01HBU1R1W Number of pages: 297Word Count: approx. 80,000 Cover Artist: Robin Ludwig Designs, Inc Book Description: Dr. Dean Frey is a man of science. His lifelong desire to create a better future for mankind has led him to the prestigious, and highly mysterious, Wilderness Institute of Scientific Research & Technology, as the head of their Robotics Engineering department. Building on the research and designs of others before him, Dean’s own genius culminates in the successful creation of Anthony—the first fully-automated, free-thinking android prototype. And now Wilderness wants to sell Anthony to the military. Unwilling to allow his achievement to become weaponized, Dean reaches out to a former Wilderness employee with the resources to help him steal Anthony and relocate them both to safety. He’s put into contact with the very secretive Nick and Olivia, who ask for one simple thing in return: trust us, no matter what you see or hear. Blind trust isn’t in Dean’s cautious nature, but he has no other choice. For telekinetic Olivia, rescuing a fellow Psion from a life of imprisonment and experimentation is one of her favorite things. Being paid is nice, but she’ll do the job for free, if it means giving Wilderness the finger. When Olivia’s reclusive mentor solicits her and her telepathic partner Nick’s help in smuggling a very special Project out of Wilderness, they jump at the chance to infiltrate their former home and do some internal damage to the institute that created them. With their combined knowledge of the facility, breaking Anthony out of Wilderness should have been easy—but Olivia learned a long time ago to never underestimate her enemies, or the lengths they’ll go to retrieve what’s theirs. And this time, the price for stealing the Project may be more than she’s willing to pay. Amazon Paperback      Amazon Kindle 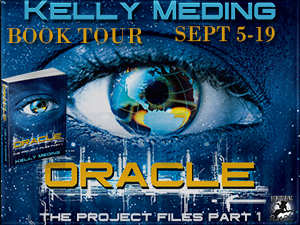 About the Author: Born and raised in Southern Delaware, Kelly Meding survived five years in the 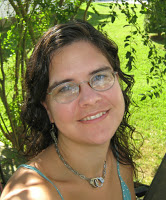 hustle and bustle of Northern Virginia, only to retreat back to the peace and sanity of the Eastern Shore.  An avid reader and film buff, she discovered Freddy Krueger at a very young age, and has since had a lifelong obsession with horror, science fiction, and fantasy, on which she blames her interest in vampires, psychic powers, superheroes, and all things paranormal. Three Days to Dead, the first book in her Dreg City urban fantasy series, follows Evangeline Stone, a paranormal hunter who is resurrected into the body of a stranger and has only three days to solve her own murder and stop a war between the city's goblins and vampires.  Additional books in the series, As Lie the Dead, Another Kind of Dead, and Wrong Side of Dead, are available in both digital format and mass market paperback from Bantam. Books five and six, Requiem for the Dead and The Night Before Dead, are published in digital and paperback by Smedge Press. Beginning with Trance, Kelly's MetaWars series tells the story of the grown-up children of the world's slaughtered superheroes who receive their superpowers back after a mysterious fifteen-year absence, and who now face not only a fearful public, but also a vengeful villain who wants all of them dead.  Trance and Changeling are available now in both digital format and mass market paperback from Pocket Books. Tempest and Chimera are available in digital format only via Pocket Star. All four books can also be purchased as a digital bundle. Writing as Kelly Meade, her paranormal romance trilogy with Berkley Intermix features three shifter brothers and the women they come to love, starting with Black Rook, and continuing with Gray Bishop and White Knight. Twitter @KellyMeding Pinterest http://pinterest.com/kellymeding Facebook https://www.facebook.com/KELLYMEDINGAUTHOR/ Website http://www.kellymeding.com Goodreads https://www.goodreads.com/author/show/2846074.Kelly_Meding
Blog Organized Chaos http://chaostitan.blogspot.com