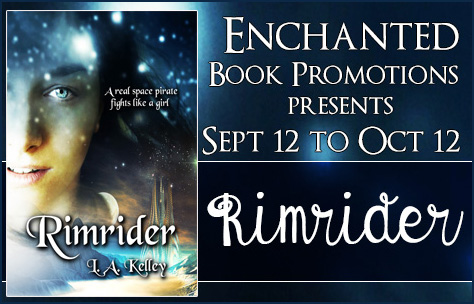 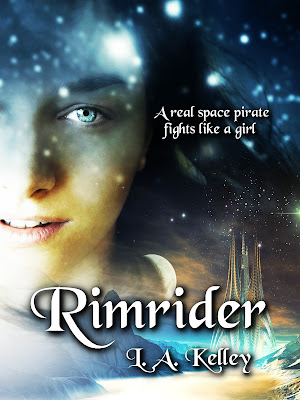 Title: Rimrider
Author: L.A. Kelley
Genre: YA Space Opera
Teenager Jane Benedict is awakened by her father and ordered to memorize a mysterious code. Hours later, Mathias Benedict is dead and Jane and her brother, Will, are wards of United Earth Corporation. To evade the company's murderous clutches and uncover the meaning of her father’s last message, Jane leads Will on a desperate escape across the galaxy aboard the Freetrader smuggler ship, Solar Vortex. Tangled in the crew’s fight against UEC, Jane saves the life of young smuggler Maclan Sawyer and learns her father’s code identifies a secret cargo shipment that can spell doom for the entire Freetrader cause and the extinction of an alien race.
Piracy, intrigue, romance, and a daring rebellion from Earth wait on the planet Rimrock. Will Jane answer the call to adventure and find new purpose on the galactic rim or will death for high treason be her fate?

I’m the author of seven fantasy and science fiction adventure novels with smart female characters more comfortable with thinking rather than shooting their way out of a tricky situation. Rimrider is the newest and the first book in the Rimrock Adventures series. The second, Outlaw Jane, is also available with the third due in 2017. The story arc is a nod to the American Revolution, but with space colonists as the Yankees and Earth as the redcoats. A reader can expect to find an element of fantasy and sweet romance, humor, space battles and conflict, but no gore.

Florida is my home. The state is a good place for speculative fiction since most people speculate the heat and humidity here have driven residents slightly mad. I can’t argue that. In my spare time I enjoy calling in Bigfoot sightings to the Department of Fish and Wildlife. They are heartily sick of hearing from me.

Rimrider is available for 99 cents on Amazon or free for members of Kindle Unlimited.
https://www.amazon.com/Rimrider-Adventures-Book-1-ebook/dp/B01JF1BQHU/ref=sr_1_1?s=digital-text&ie=UTF8&qid=1470752813&sr=1-1&keywords=rimrider#nav-subnav

L. A. Kelley’s Lurking Spots
Want to connect or find out about my other books? My lurking spots are below or email me at l.a.kelley.author@gmail.com. I love to hear from readers. If you have a blog, I’d be happy to do a guest post or interview. Just want to say hi or have a recipe to share? I’m up for that, too.
Facebook http://www.facebook.com/l.a.kelley.author
Twitter https://twitter.com/AuthorLAKelley
Amazon Author Page
Blog L. A. Kelley's Naughty List

As the train came to a halt, Jane grabbed her backpack and exited. Sweepers patrolled the platform. A group of men and women dressed in gray utilitarian coveralls descended from the first car. Their ankles bound with electronic shackles—more workers headed to the mine.
Pity tugged at Jane’s heart. Her eyes followed as they shuffled past to waiting transportation.
One of those people used to be Adelyn.

An edgy sensation traveled along her spine. One of them could be me if I’m not careful in Golgotha.

The scent of cooking tickled her nose. A man in a kiosk sold balls of fried sweet bread. Jane eyed them with regret. No use dreaming. Her credits were earned on the Solar Vortex. She couldn’t spend them here without raising questions. Breakfast had to wait. She asked the man at the kiosk for directions to the admin office, and he grunted a response.

Jane shouldered her backpack. Her stomach rumbled as she got another whiff of fried dough. “Stop it,” she muttered to herself. “Besides, have you seen the prices he’s charging? Four credits for fried sweet bread? Lyla would have a fit.”

The admin office sat next to the station. It was still closed, so Jane wandered to the platform and sat on a bench. Everyone had gone except a single sweeper and the man at the kiosk. An errant breeze wafted another scent of fried bread in her direction. She sighed.

Goosebumps rose on Jane’s arms with the uncanny notion of being watched. Jane looked left and right. Neither the sweeper nor vendor paid her any attention. She shifted on the seat as the feeling grew stronger. A tickling sensation prickled the back of her head. Jane turned around. The little golden creature peered at her from a tree limb.

Jane stood and gazed into those striking eyes. Was it the same animal she noticed from the train?

Jane started. She glanced back and forth searching for the source of the whisper, but no one except the creature was near. She scratched her head. How weird was that? She was now hungrier than ever. The whispered word increased the sensation of an empty stomach, as if the desire to eat wasn’t hers alone.

“I must have breakfast on the brain,” Jane muttered, eyeing the fried sweet bread piled on the kiosk. The poor thing sure looked as if it needed a meal. “If I had four credits to spare, I’d buy you a plate.”

The sweeper near the kiosk turned in her direction. His eyes narrowed as he peered over her shoulder. He raised the laser gun and pointed the barrel at the creature.