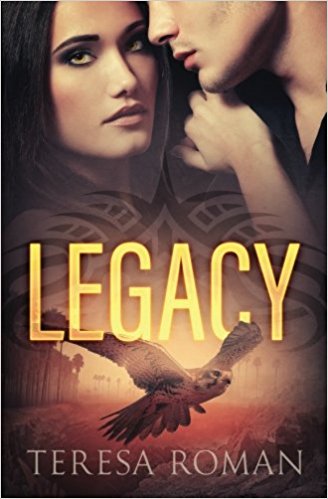 All Jordana wants is to be like her friends instead of her shapeshifter mother who died when she was a kid. So when a stranger claiming to be a scientist offers her a “cure,” she jumps in with no questions. Christian, a shapeshifter who’s mysteriously shown up at school to befriend her, is furious when he learns that Jordana is rejecting her kind. He doesn’t trust the scientist, either, but all he can do is watch helplessly as the stubborn girl he’s fallen for gets sicker and sicker. When Jordana finally realizes she is slowly being poisoned, she confronts the man who deceived her. He’s not the scientist he claimed to be, but a powerful warlock. An antidote in his possession can save Jordana’s life, but can she or Christian outwit the warlock in time?

I found my latest book boyfriend in this book! Legacy is written by Teresa Roman in first person POV from the point of view of Jordana (Dani), and my new boyfriend Christian. Dani and Christian are shifters, living among humans, witches and warlocks. Life was as normal as it can get for a shifter until Dani was promised a cure. A way to live normally among humans.  It seemed fine until Dani got sick. Her health steadily declined until she found out what was wrong. Determined to save herself, she ran away to find the cure, only to be kidnapped. Christian followed her, not willing to let her out of his sight.

My favorite part (other than Christian) was how complex the characters are. They are constantly changing and maturing. The characters are also very passionate and strong. They don't let anything get in their way. Dani went after a powerful villain because she was pissed off that someone had tricked her. Christian almost killed the same person because he had hurt Dani.

All in all, a great book. 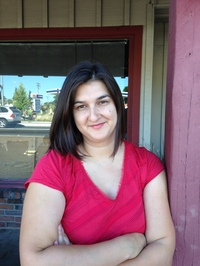 If it was possible to be born with a book in her hands, that's how Teresa Roman would've entered this


world. Her passion for reading is what inspired her to become a writer. She loves the way stories cantake you to another time and place. Teresa currently lives in beautiful Sacramento, CA with her husband, three adorable children and a dog named Parker that her son convinced them to adopt.

When she's not at her day job or running around with her kids, you can find her in front of the computer writing, or with her head buried in another book.

If you'd like to find out more about her, she can be found at www.teresaromanwrites.com where you can also sign up for her newsletter to receive exclusive book release information.