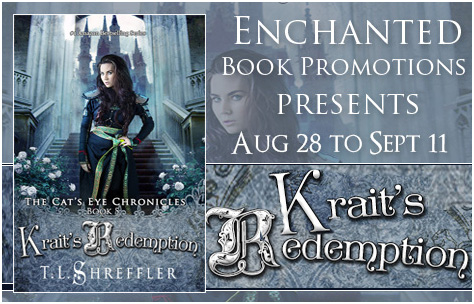 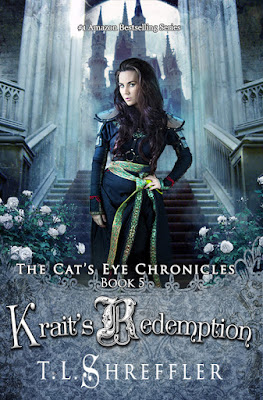 With winter solstice fast approaching, Sora and her companions are running out of time. She must stop The Shade from awakening the Dark God, yet a powerful force has overtaken her Cat’s-Eye necklace, rendering the stone almost useless. To use the stone, Sora must learn to trust her instincts and embrace her own inner strength. She joins forces with unexpected allies, Lord Gracen Seabourne among them, to protect the City of Crowns.

As the city dissolves into chaos, she finds herself barreling toward an epic battle that will decide the fate of mankind.

At risk to his own life, Crash returns to the Hive seeking aid against Cerastes. However, the events that led him into exile have not been forgotten.

Will the Hive offer him redemption, or will they demand he pay the ultimate price for his transgressions?

Join Sora and Crash in their epic battle to save the City of Crowns! 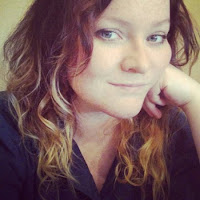 T. L. Shreffler is a noblewoman living in the sunny acres of San Fernando Valley, California. She enjoys frolicking through meadows, sipping iced tea, exploring the unknown reaches of her homeland and unearthing rare artifacts in thrift stores. She holds a Bachelors in Eloquence (English) and writes YA Fantasy, Paranormal Romance and poetry. She has previously been published in Eclipse: A Literary Anthology and The Northridge Review.

Giveaway
Win 1 signed copy of Krait’s Redemption, 1 Cat’s Eye Necklace or 1 free eBook copy of the book during our giveaway!

Crash watched the bonfires in the distance.
Each day, more devotees swelled the Shade’s ranks. Shadow portals transported them from cities, from fields and mountains—from anywhere—to this forsaken desert. Nameless warriors pooled beneath a red plateau that towered in the twilight, blocking the moon.
An army of the lost, Crash thought. Their burning pyres beckoned to him like lighthouses on a foreign shore. But he had left those fires behind, walking miles into the flat desert to sit among the sand.
The Shade’s encampment might be in the Desert of Ester, but he wasn’t sure. His sense of certainty had fled long ago. He wondered at this unprecedented gathering. He wondered at the royal city’s evacuation, so close to winter solstice night.
He watched the fires glint against the darkness. He watched, and sat, and pondered. At first, Cerastes’ army had puzzled him. He didn’t know why a Grandmaster, typically a solitary figure concerned with martial discipline and meditation, would want to gather so many numbers. But now, as Crash became more firmly entrenched in the Shade’s activities, he knew what they were about. He had thought Cerastes meant to wage war against the human kingdom, but he was wrong.
Cerastes wanted the Hive.
Crash had realized the Grandmaster’s ambition when the assassin Cobra had issued his last dying words. It had all become suddenly, perfectly clear. Stop him. Cobra’s death had returned the arrow to Crash’s compass, and perhaps for the first time, he knew true north. He knew what he had to do.
He stood and walked away from the crimson fires on the horizon, behind an outcropping of rocks. There, he emptied a bag onto the ground. Ingredients for his spell, including a sheaf of yellowed parchment and fresh salamander ink, fell to the sand. He wrote the spell, then built a small fire out of venomgrass and willow bark. He drew symbols in the sand, and the flames turned indigo blue. Then he burned the paper with its written message. A wandering wind brushed the top of the dunes, carrying wafts of sand and smoke up to the stars.
He doused the fire when he was finished. Then, his black hood pulled low over his face, he sat on his heels to wait.
Redemption. A returning, a renewal. Would the Hive help him now, or would they hold him to his trespasses? Someone must answer, he thought. Someone must answer his call, his message burned on the wind, and someone must answer for his Grandmaster’s mistakes.
He thought back to Sora and the rest of his companions in the City of Crowns, and he felt ashamed. Under the influence of Cerastes’ power, he had wavered. His demon had sensed his Grandmaster’s dark aura, had sensed a home, and for a while, he had lost himself. But Sora’s touch—more than that, her words, her spirit—had brought him back.
He couldn’t fight Cerastes alone. He couldn’t trust his darker half to resist the Shade’s pull, because he, too, was a discarded outcast of the Hive. His Grandmaster’s demonic presence was irresistible, drawing close all those scattered savants with nowhere to belong. Crash had felt his own will tremble. Even now, he couldn’t quite steady his hands. He couldn’t show Sora his weakness. More importantly, he couldn’t show it to his own kind.
Someone had to do the right thing. The right thing, he thought ironically. Someone had to warn the Hive. Anyone who can read the Wind can read this message, he thought. He only hoped Cerastes was too distracted to see it.
Hours passed as he waited. The silence of the desert stretched, as spacious and echoing as a tomb. The stars and moon circled overhead, trailing across the heavens. He found the constellation of Kaelyn the Wanderer and asked, begrudgingly, for luck. Then his eyes picked out other celestial formations known to his race. He recounted their stories in his head: Sibilant, the assassin so stealthy and quiet, she could walk between this realm and the world of ghosts; Dartmouth, who replaced his teeth with knives; Marrow, so cunning he outsmarted the gods and stole the Dark God’s weapons in eons past. Crash found it ironic that, despite all that had transpired, a story could still lend him courage. And each star was a story, a light in the dark, a dream in the abyss.
The wind picked up without warning. A whirl of sand twisted up from the ground, building, growing. Then a figure stepped from the dust.
Crash stood up. He didn’t know what to expect.
The sand settled. A woman dressed in black stood before him. She was insidiously tall. Her hair fell in plaited rows down her back. He noted the chakrams at her belt: circular blades that could remove a man’s head with a single powerful throw. Her eyes glowed the shocking green of aloe.
Memory stirred, and he recognized her. He searched for her name. It came to him.
“Grandmaster Natrix,” he bowed.
“Viper,” she returned, and waited for him to straighten. “I have listened long for word of my brother. Tell me, what has Cerastes done?”