Sale Blitz & Giveaway: The Exception to The Rule by Beth Rinyu (Contemporary Romance)

When Katrina “Kat” Vallia, an idealistic if somewhat naive 20-something American pediatrician travels halfway across the globe to volunteer in a poor African village, she looks at it as a means of closure. Following a bitter breakup with her unfaithful boyfriend, she decides to throw herself into her work without any distractions from a man. That’s until she encounters Dr. Julian Kiron, a handsome, career driven pediatric oncologist. Even though she tries to fight it, Kat finds herself falling deeply for him; until she painfully realizes that they both want totally different things from life. Not willing to compromise for the other, they sadly say goodbye, cutting all ties. Five years later, Kat’s happy world is turned upside down when she is given devastating news. She must now confront her past and the secret she’s harbored for years. But will saving the one she loves most also rekindle the love she let slip away? 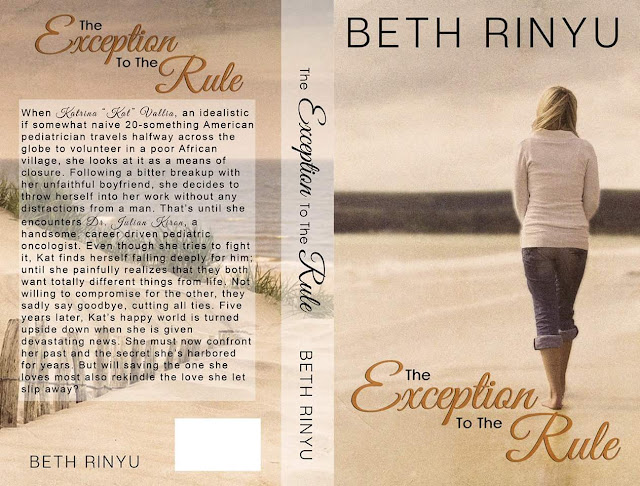 Ever since I can remember, I have always enjoyed Creative Writing. There was always something about being able to travel to a different place or become a different person with just the stroke of a pen - or in today's world a touch of the keyboard. I am the author of The Exception To The Rule, An Unplanned Lesson, An Unplanned Life, Drowning In Love, A Cry for Hope, A Will To Change, Blind Side of Love, When The Chips Are Down and Easy Silence.
My life is not as interesting as my books or the characters in them, but then again whose life is? I'm a mom of twin teenage boys, a crazy Border Collie and a cat with an identity crisis! I guess you can say writing is my form of relaxation.