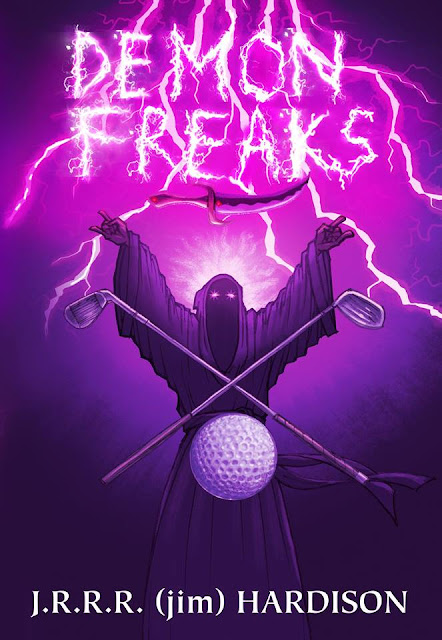 It’s the night before the SAT test. The forces of darkness are stirring.
Twin brothers, Bing and Ron Slaughter, know they’ve got to cram like their lives depend on it because their college plans sure do. If they don’t ace the test, they’ll be doomed to spend the rest of their days flipping burgers at the McDonald’s their parents run. That’s why they hatch a plan to meet up with the members of their punk band, the Ephits, spend the night studying at a secluded cabin in the woods, and maybe squeeze in a little jamming. What could go wrong with a brilliant plan like that?
Ancient evil. That’s what.
As a cataclysmic lightning storm rolls in, Bing, Ron and the rest of the Ephits find themselves tangled in a sinister plot to summon a demon. Yes, demons are real. To survive the night, the band must find a malevolent artifact, battle bloodthirsty monsters and stand against the most dangerous and powerful foe humanity has ever faced…the Golfer’s Association.
Fiery Seas     Amazon     BN     iTunes     Kobo

I just finished reading Demon Knight by J.R.R.R (Jim) Hardison. I am a huge fan of horror, and truly appreciate comedic horror. I thought this was well written, and really imaginative in a lot of the mythology. Some of it was just really funny, the golfers, for instance, and the clubhouse. Truly different in a lot of ways, I can’t go into more detail without spoiling.

However, it took me a really long time to get into this book. The reason for this wasn’t the lack of action, but rather the lack of time spent getting to know the characters before they are plunged into the action. We are introduced and then they are all scrambling to save their friend, and stop the demon. Because there was so little time getting to know these kids, it took forever for me to care about them and what was happening. I wished that Mr. Hardison had spent a few chapters showing us their everyday life before jumping in.

This was a good book, with a different vision, and a lot of charming and interesting ideas. If you love horror comedy, then give it a shot. 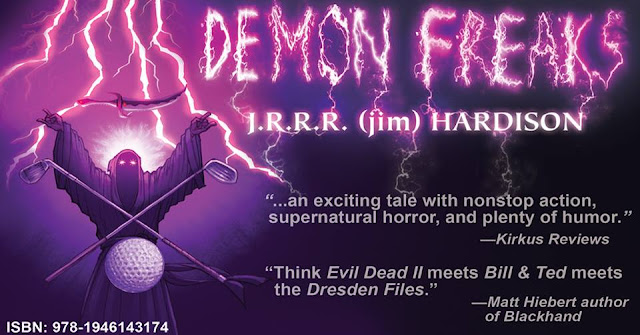 “Wait, wait, wait,” Ron interrupted. “The Golfers Association? Don’t you mean insane cultists or Satan worshipers or evil wizards or something?”
​
“Insane cultists, Satan worshipers and evil wizards are like elderly nuns compared to the Golfers’ Association,” their prisoner responded. “You’d be much better off if it were something that simple. These guys are demon freaks.”
“Demon freaks,” Bing repeated in a whisper. “That sounds…bad.”
“Oh, it’s bad alright,” the prisoner shuddered. “You have no idea.” 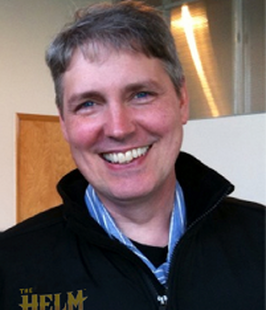 Fish Wielder is J.R.R.R. (Jim) Hardison's first novel novel (He wrote a graphic novel, The Helm, for Dark Horse Comics). Jim has worked as a writer, screen writer, animator and film director. He started his professional career by producing a low-budget direct-to-video feature film, The Creature From Lake Michigan. Making a bad movie can be a crash course in the essential elements of good character and story, and The Creature From Lake Michigan was a tremendously bad movie. Shifting his focus entirely to animation, Jim joined Will Vinton Studios where he directed animated commercials for M&M’s and on the stop-motion TV series Gary and Mike. While working at Vinton, he also co-wrote the television special Popeye's Voyage: The Quest for Pappy with actor Paul Reiser.
Jim has appeared on NBC's The Apprentice as an expert advisor on brand characters, developed characters and wrote the pilot episode for the PBS children's television series SeeMore's Playhouse and authored the previously mentioned graphic novel, The Helm, named one of 2010's top ten Great Graphic Novels for Teens by YALSA, a branch of the American Library Association. These days, Jim is the creative director and co-owner of Character LLC, a company that does story-analysis for brands and entertainment properties. He lives in Portland, Oregon with his lovely wife, two amazing kids, one smart dog and one stupid dog.
http://www.jimhardison.com/
https://twitter.com/FishWielder
https://www.facebook.com/fishwielder
https://www.goodreads.com/author/show/2893010.Jim_Hardison