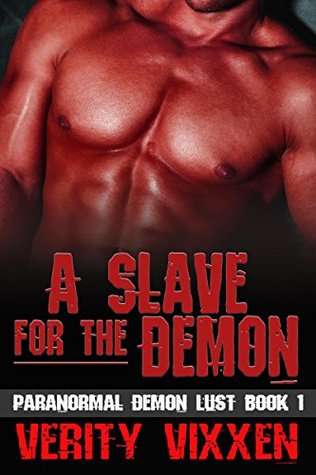 A young slave woman from the mine pits, chosen as a sacrifice.
A demon of insatiable lust.
What will happen when he takes her as his own?

I did not know when I awoke that today would be unlike any day I'd ever known before. Today, I was picked for the Master and freed from the slave pits. I have been chosen as a sacrifice for a demon called forth from Hell. A demon of insatiable lust. A demon who demands utter obedience, inflicts pain, and takes whatever he wants. I will be all his, utterly and completely. I will pleasure him in every way I know how. I want him, more than I've ever wanted anything before.
This story features BDSM elements: whips, chains, dominance and submission. It also featuresvoyeurism , a demon with a very, very large.... appendage, and a pair of imps who like to join in on the action. Not to be read by the faint of heart.
This short story is 8000 words. It is the first part in the three-part series. It does not have a cliff-hanger ending and can be read stand-alone.

While browing through the free section on amazon looking for something interesting, I found A Slave for a Demon by Verity Vixxen.Yeah, the title and author's name alone should tell you this is a sexified book.

A slave girl working in the mines of hell is hand picked to be ¨ The Master's¨ new play thing. This should be disturbing but it is very tantilizing. Our leading lady has no name but then in hell does one need one? The master made me think of Tim Curry in Legend.

Scenes are very hot! It is a quick read that may have you panting for more.

LOVE FREE EROTICA? Come on over to Verity's site at www.verityvixxen.com and grab SEVEN sexy stories for FREE!
You'll find Verity wherever hot sex can be had. Sometimes, that's the mundane world, but more often than not, you'll find her deep in a fantasy of her own creation, in exotic, erotic locations, and distant worlds.
Whether you're being swept off your feet by lusty pirates, taken by the t-rex, or pounded by aliens, Verity writes to immerse you in a sexual world of hard loving that will leave you panting for more.
Verity aims to arouse your mind, as well as your body, with well-crafted stories, sexy heroes and heroines, and lots of steamy, steamy sex.
Verity is co-founder of Spice eBooks.

"The glass of the mirror frosted as though covered in ice and then it shimmered and suddenly Master Asim and I were no longer reflected in it.
Instead, there stood a monster, a demon. He was seven feet tall and completely naked. His skin was the red of fire, and his hair was black as coals, with two horns rising on either side of his head. His face was all angles and plains; with high cheekbones and a chin that jutted unnaturally. Eyes, dark and filled with malice, roamed the room. His frame filled the mirror, thick ropes of muscle bulging from his chest and neck, but my eyes were drawn downwards to the giant - - that hung down his leg, the size of a bull’s.
What would that thing look like when erect?
Upon each of his shoulders sat a tiny imp, exact replicas of their master but no bigger than the length of my forearm. They were dwarfed against his enormous bulk. Behind him, I could see only flames and bare rock, and with horror I knew that I must have been looking into the depths of Hell.
The demon came forward and ducked his head. He stepped through the mirror and was suddenly in the room with us. Immediately, I could feel his warmth radiating towards me like flames. I could not draw my eyes away from the demon's member, swinging as he walked.
"Oh, great Lord!" called Master Asim, though it would seem that here he was the servant. "I have brought you this morsel to satiate your lust!"
The demon turned its black eyes towards me and smiled, showing rows of sharpened teeth. When it spoke, its voice was a booming rumble that thudded inside my skull. "You belong to me now," he said. "Please me, and I shall give you ecstasy beyond your imagining. But displease me…" His face grew angry, and I quivered with fear and expectation.
The demon stepped closer.
Asim moved away, taking a seat in the chair behind us. I could see the lust and excitement on his face. Whatever was going to come next, he was going to be a spectator and he was going to enjoy it.
"You are to do exactly as I say," said the demon. "You will not speak, will not make a noise, unless I order it. You shall do nothing, touch nothing, unless I order it. I own you, completely. Understand?"
I swallowed and nodded.
The demon smiled his sharp-toothed, malicious smile. He reached out a single, long, black-clawed finger and touched my shoulder. A burning pain jolted down my arm the moment his nail laid against my flesh. I looked down to see a strange symbol, glowing on my skin where the demon had touched me. The demon pinched the corner of my robe. The dress disintegrated beneath his touch, turning to ash that floated around me as the last tendrils of material disappeared.
I was completely naked and at the mercy of a demon.
"Over there. Hands and knees. Now."
Posted by sldearing at 5:00 AM