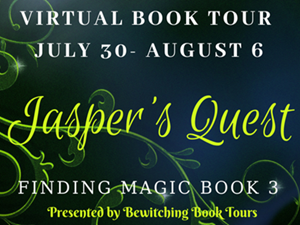 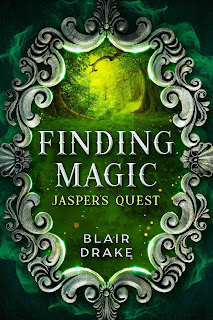 Jasper's Quest
Finding Magic
Book Three
Blair Drake
Genre: Paranormal Romance
Publisher: Magic Quest Books
Date of Publication: June 21, 2018
ASIN: B07DFQPKQ6
Number of pages: 228
Word Count: 79,800
Cover Artist: Jennifer Zemanek/Seedlings LLC
Tagline: What would you do to find your magic?
Book Description:
When seventeen-year-old Jasper Walker is caught up in a violent storm and flung off the roof of Gray Cliffs Academy along with nine of his school mates, he has no idea what is happening. Even stranger is the unfamiliar world he finds himself in. An alternate universe that reminds him of Africa, he’s startled to discover the year is 1675 and no one in the land of Ardhi has a clue about the world he came from. Then he meets Rylan, a magical healer who has been cursed by an evil king to age well past his time. If the curse isn’t broken, Rylan will die and time is running out…
Jasper is shocked to discover he’s the only one who can break the curse. He must call on his magical powers of supernatural strength and face a multitude of challenges in order to save Rylan’s life…and return to Gray Cliffs Academy.

About the Author:
Blair Drake believes in magic, especially the magic of stories with fantasy, adventures, romance, action, and surprises. She has loved writing and living in the stories of the Finding Magic series and is so excited to share the quests of the Gray Cliffs Academy students with her readers.
When she’s not writing about magic, she’s reading about it. Her influences are Cassandra Claire, Neil Gaiman, Rick Riordan, Garth Nix, and many more.
In the mortal plane, following the lure of magic has drawn Blair into strange and wonderful adventures from Australia to New York City, with many stops in between. She currently lives near Denver. Her very favorite spot is a red loveseat in her office, frequently shared with two cats, an outnumbered Dalmation, and occasionally her bewitched husband.
She might have gone to a school similar to Gray Cliffs Academy and would love to go through a magic portal. In the meantime, she’s creating her own in more books of magic.
Newsletter: http://eepurl.com/dyl_vv
Website: http://blairdrake.com/
Twitter: https://twitter.com/BlairDrakeBooks
Facebook: https://www.facebook.com/authorblairdrake/
Goodreads: https://www.goodreads.com/author/show/18107775.Blair_Drake
Amazon: https://www.amazon.com/default/e/B07DFZH9P4/
BookBub: https://www.bookbub.com/authors/blaire-drake
Posted by sldearing at 5:00 AM