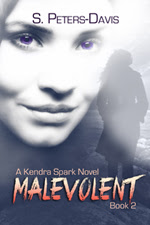 Tagline: Trafficked girls marked to lose their souls by a malevolent supernatural entity require someone with explicit abilities for their rescue. Will Kendra be able to save them?

Kendra Spark, suspense-mystery writer and communicator with the dead, signs on to the next FBI Special Task Force case, trafficked girls that are marked to lose their souls.

Jenna Powers, ghostified criminal analyst, sticks close to the case as she and Kendra are also marked by the same malevolent supernatural force.

Derek Knight, lead FBI Agent on this case, learns of the malevolent entity and the deeper paranormal realm of danger.

Kendra’s unfiltered feelings for Derek struggle to take a backseat, and as the menacing threat grows more intense, so does her passion for Derek.

Derek faces uncertainties he’s never dealt with in his past, like malicious entities and the loss of his heart to love. How can he protect Kendra against forces he can’t see?

As boundless supernatural danger intertwines with the future reality of the trafficked teens, Kendra and Jenna realize only they can shoulder the rescue by calling in a voodoo priestess…

We left in silence, and during the whole drive to Derek’s place, neither of us said a word.
As soon as we drove into his driveway and parked near his garage, outside lights popped on, streaming through the window and shining across Derek’s face. He turned to me and said, “So what did you not tell Jackson?”
“You gotta hand it to him, our Derek is a pretty receptive dude.” Jenna snickered from the backseat.
“I didn’t tell him about Buster, the malevolent spirit from the hotel. He’s also known as a soul-sucker.”
“What does that mean?” Derek’s back went rigid straight.
“It means those girls don’t know anything about their abuse because their souls are no longer inside their bodies. The soul-sucker absorbs them as his energy source.” There was no way I would tell him females were his favorite meal, or young girls were like a euphoric dessert. “Bertellia’s prostitutes’ souls have taken up residence inside the empty bodies of the teen girls. They are using them like a vessel.”
Derek’s eyes widened to the size of half-dollars. “Are you saying prostitutes live inside those kids?”
“Exactly.”
Derek climbed out of the SUV, and so did I. He went to the back and hauled out my luggage.
“I’m having a hard time wrapping my brain around this, Kendra,” Derek stated. “It sounds like something only a fiction writer would come up with as an explanation.”
Wow, what a blow, as if he stabbed a sharp blade directly into my heart and twisted it a million ways at once. Heat blasted across my face and scurried down my neck. Maybe I shared too much, too soon. I didn’t need him doubting me, nor did I need the hurt and frustration sweeping through me right now.
“How does this guy take their souls?” He stared at me, his startling blues went stormy. “Are you telling me this thing we dealt with inside the hotel room could have taken your soul? Or Jenna’s?” He hissed an exaggerated breath, dropping his gaze to the ground and shaking his head.
“Wow, keep it coming, Derek.” Jenna stepped next to me, punching her fists at him like a boxer on steroids. “Now what are you going to tell him? Hopefully, the truth. That both of our souls are marked by that soul-stealing freak for his consumption.”
That wasn’t what I would share with Derek, considering his acknowledgment of what actually happened in the hotel room. He had some understanding of the danger.
“So, what can stop it?” Derek spoke through clenched teeth, bringing me back to his previous questions. He was already overprotective, but what could he possibly do to protect us from Buster?
How would I respond? Clueless as to the extent of Buster’s abilities, but I was sure about what Grandma Ellie said, he could steal Jenna’s and my soul. Plus, a strong intuitive feeling told me in order to destroy that beast we would have to get up-close and personal with it.
“I’m sure I’ll find answers in Grandma Ellie’s journal. It’s the research I told you I still needed to do. I’ll require specific supplies and chants, and maybe someone else’s help.” Someone that knew about malevolent spirits and what it took to destroy them because right now I hung totally out of my realm. I needed to find Buster’s vulnerability, his number one weakness, his achilleas heel.
“All this supply stuff and chanting, that sounds like pagan lore. Are you a witch, Kendra?” He rolled his shoulders and his furrowed gaze melded into mine.
“I like to think of myself as a spiritualist.”

S. Peters-Davis writes multi-genre stories, but loves penning a good page-turning suspense-thriller, especially when it’s a ghost story and a romance. When she’s not writing, editing, or reading, she’s hiking, RV’ing, fishing, playing with grandchildren, or enjoying time with her favorite muse (her husband) in Southwest Michigan.

She also writes YA paranormal, supernatural novels as DK Davis.

Posted by sldearing at 9:17 AM