* Spirits of the western wild *

This mystical adventure follows a young adventure-seeker named Luther McCleron on a westward journey to learn more about his Grandfather. A series of fateful missteps take Luther far from his destination to a disheveled little town under the tyranny of a crooked sheriff named Big Willie. It’s here that Luther comes face-to-face with the legendary ghost of Monty: a curmudgeonly ghost who refuses to believe he’s dead. Luther just wants to get back to his quest, but Monty thwarts his plans by using Luther to take out his vengeance on Big Willie.

Through a catastrophic string of events, Luther and Monty find themselves hopelessly entangled in a combative partnership that escalates to the breaking point. Only by reconciling their differences are they able to uncover the profound connections that weave their fates together.

A mysterious book of premonitions, an ominous crow, and ancient Indian drive the mystical tone of this world; conjuring spiritual forces to help steer Luther on his journey through this western “twilight zone.”

All the loose ends resolve in a satisfying story of redemption, loyalty and ascension while exploring the mysterious nature of fate and destiny. Was all of this a coincidence? Or are we guided by ancient “spirits on the wind” that nudge and steer us along our path to assure that we arrive safely at our intended destination in the end?


5 out of 5 stars
A fantastic and Immersive adventure for everyone.
What a wonderful audio book and what a pleasure it was to be on this journey. Not only the adventure was captivating but also everything around it. The sounds effect and voices really bring it all together, you almost feel like you are right there witnessing all this first hand. The production quality is something I have never heard before. Very well done and I highly recommend it. 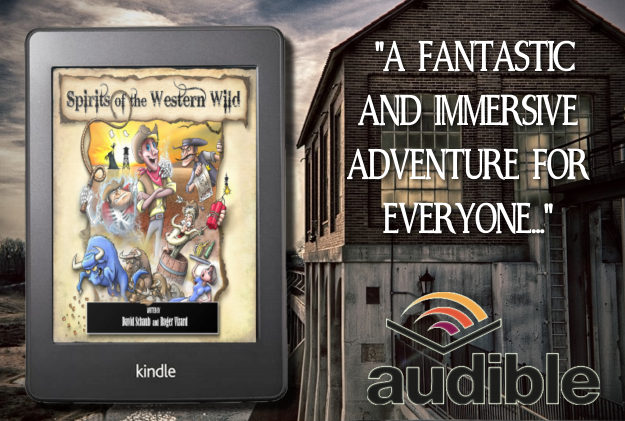 It's eerily quiet here, aside from the monotonous sound of a squeaking windmill, long detached from the rusted pump that feeds the wooden water

tower.
Dilapidated wooden structures are mixed with colonial Spanish architecture.  Ominous religious relics are awash in the orange glow of twilight -- home of the classic Spaghetti Western.
Jasper leads the way, mumbling nonsensical gibberish to himself.
Luther tags along cautiously -- unaware of a stoic old Indian watching from the shadows of the abandoned post office.  This is Kickapoo -- eyes barely discernible inside the ancient crevices of his face.  From under his poncho, Kickapoo radiates the calm tranquility of an ancient spirit.  All-knowing -- silent and still -- moving only as much as required to breathe.
A small flourish twists overhead -- a remnant of the storm -- and a page from Luther's lost book swirls in and settles at Kickapoo's feet.
PUSH IN on the header:  “CHAPTER 2: THE DELIVERANCE.”
Kickapoo gives an appreciative nod skyward.  The plan is unfolding... 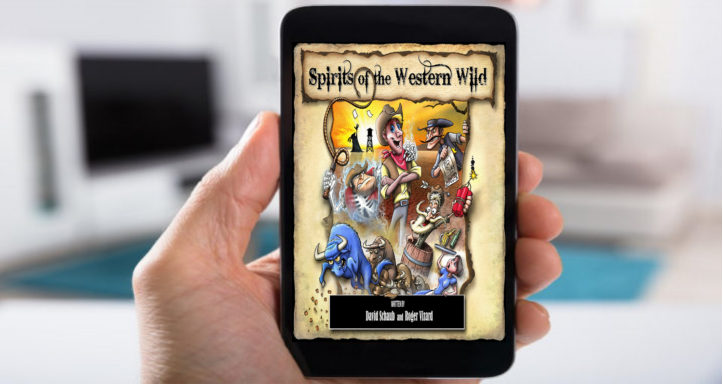 David Schaub is a writer and Academy Award ® nominated Animation Supervisor working in the film industry for more than 25 years. In 2019 he produced and directed the audio adaptation of SPIRITS OF THE WESTERN WILD.  He also developed STORY COMPASS® smartphone app for screenwriters (www.moviemethods.com) in 2017.

Schaub received Oscar nomination for animation in Tim Burton’s ALICE IN WONDERLAND (Disney), along with nominations for BAFTA Award, Saturn Award and Critic’s Choice Award, and won the Golden Satellite Award for Best Visual Effects for his team’s work on the film.


Roger Vizard is a writer and self-taught artist. He was accepted into the animation program at Sheridan College in1987, then worked at Sullivan Bluth Studios in Ireland, then as an animation apprentice on “WHO FRAMED ROGER RABBIT” at Richard Williams’ studio in London.  He later became Williams’ assistant animator on “THIEF AND THE COBBLER.”

After several years working in Europe at studios like Gerhard Hahn in Germany and A-films in Denmark, he moved to Los Angeles in 1993 to work as a story board artist on the first season of Sonic the Hedgehog, then rolled back into animation again after that.  He successfully made the transition to from 2D to CGI on “STUART LITTLE 2” in 2001, and since that time have worked non-stop at animation/VFX studios in Los Angeles.