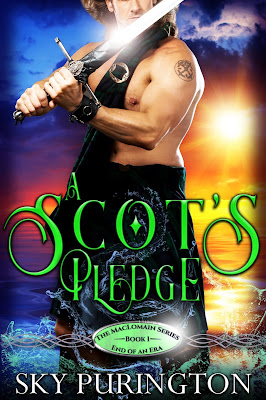 A Scot’s Pledge
The MacLomain Series: End of an Era Book 1
Sky Purington

Tagline: From friends to lovers, forbidden passion sparks between a modern day woman and a medieval Highland warrior.

Accustomed to watching over things for Clan MacLomain and their Viking ancestors, Julie had given up hope of traveling back in time for love like those before her. Until the day an old friend turned crush shows up on her doorstep in New Hampshire claiming he needs help in fourteenth century Scotland.

Having pledged to help his clan, Laird Tiernan MacLomain searches for his destined Broun in the twenty-first century. Yet he only wants the woman he's secretly loved for years. So he breaks the rules and brings Julie back to the medieval period with him. She might lack the bloodline needed to harness the power of the Claddagh, but he won't leave her behind.

Together, they embark on a whirlwind quest to protect King David II against Edward Balliol and his disenfranchised nobles, the 'disinherited.' They also face a dark threat nobody foresaw. Will Tiernan and Julie defeat it without the power of predestined love? Or will breaking the rules be their ultimate downfall and Scotland's ruin? Find out in A Scot's Pledge, an emotional and passionate journey into the turbulent onset of the Second War of Scottish Independence.

He had her figured out. But of course, he did. He was her best friend. “How did you get that out of everything I just said?”
“Actually, I’ve sensed it for quite some time now.” He remained perfectly blunt. “When you opened the door tonight, I knew you felt just as strongly as me.”
“You don’t know that.”
“But I do.”
“How?”
“Your heart for starters.” His eyes twinkled. “’Twas about pounding out of your chest.”
“Maybe I’d been dancing...” yeah, right, so weak, “with my friends.”
The corner of his mouth shot up. “To Christmas music?”
“It can be upbeat.”
“You hate dancing.”
“I hate sucking at dancing.”
“You dinnae suck at dancing.”
“Oh, but I do.”
“You just havenae had the right partner.”
“We’re talking about upbeat dancing,” she reminded.
“Nay, we’re talking about you trying to do what you think is the right thing,” he replied. “Pushing me away when all you really want to do is find out what it would be like…at last.”
He was way too on to her. Yet what precisely was he referring to? It sounded like they might be off the topic of dancing and on to something else. “Being cryptic like your father again, I see.”
“You know what I’m talking about.”
Definitely not dancing. Right?
“No clue.” But she could imagine so very, very well.
“You want to know what it would feel like to dance with me.” His tone dropped to a sexy octave that about curled her toes. “Then, mayhap more.”
“Definitely not interested in dancing,” she lied then grabbed at anything she could. “Okay, I’m just gonna give it to you straight.” She thought fast and came up with the perfect argument. “I think your magic going all wonky has you struggling for normalcy, something dependable, and that’s always been me. So you’re latching on to what makes you feel like you still have control over things.”
“Latching on?” he murmured, his gaze all smoldering-bedroom-eyes now. “Good idea.” His magic wasn’t so wonky that he couldn’t flick a wrist and turn the music up. Before she darted away, he reeled her close. “You’re right. Latching on to you does make me feel better.” His eyes met hers. “In control, as you say.”
This was so not a good idea. Stay strong. Step away. Think of Scotland. All the lives depending on him. You’re his voice of reason. Yet, just like it had when he embraced her earlier, all logic fled the moment she was in his arms. Her inner self-coach threw in the towel at the feel of his hard body. At the look in his gorgeous eyes.
She was in way over her head here.
Scratch that. She’d already drowned.
“You are not entirely right, though, Jules,” he murmured, tilting her chin until her eyes didn’t stray from his. As if they ever would. “This doesnae feel normal in the least.”
Had she mentioned normal at some point? Because she agreed, this felt anything but. She felt electrified, on fire, like the room—no, the whole house—was fading away. All that existed was him. His hot as hell face, his eyes, lips, the tiny braids in his hair, the plaid wrapped over his broad shoulder…
“Oh, no,” she exclaimed, realizing too late he’d pulled her right into his web.


The room was really gone.

Purington loves to hear from readers and can be contacted at Sky@SkyPurington.com. Interested in keeping up with Sky’s latest news and releases? Either visit Sky’s website, www.SkyPurington.com, join her quarterly newsletter (https://bit.ly/2Mw0yyO), or sign up for personalized text message alerts. Text ‘skypurington’ (no quotes, one word, all lowercase) to 74121 or visit Sky’s sign-up page (https://mobile-text-alerts.com/subscribe/skypurington). Texts will ONLY be sent when there is a new book release. Readers can easily opt out at any time. 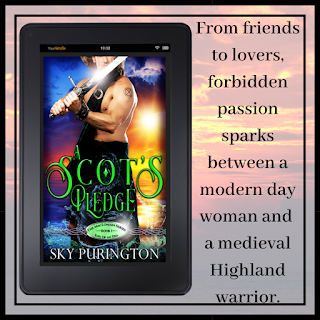