An expatriate businessman, Gregg Westwood, leaves the Officers’ Club at an American Air Base in Japan unaware about the impression he’s made on two intelligence agents. They sized him up as someone with potential for strategic deployment, and more importantly, he’s under the radar.
Gregg’s exploits start with what he thinks is a one-off assignment as a courier, and the straightforward task spirals out of control. He’s forced to rise to the occasion and use every resource available to survive. Even his family is jeopardized which forces him to return to Japan to settle scores.

The Courier is one man’s struggle to fight for survival in a world that he’s not been trained for and where violence and retribution are the names of the game.

“The Bottom Line: One of the year’s best thrillers.”
–BestThrillers.com

“With such fine attention to detail in creating some amazing scenes, I give The Courier 4 out of 4 stars. Campbell creates an amazing and well-edited adventure that could even someday work on the big screen. Readers that enjoy action adventures or thrillers will likely enjoy this one as well.”
–Official review by Kendra M Parker, OnlineBookClub.org

“The Courier is an exciting ride from start to finish. I couldn’t put it down and wanted more when it finished.”
–Gyle Graham, entrepreneur and longtime Tokyo expatriate

“The Courier would transform well from a thriller novel to an action movie.”
–Michael Harrison, marketing expert and martial artist

The taxi bounced over the speed bump and splashed through a steaming puddle of rainwater remaining from a summer shower as it sped toward the front entrance of the Ambassador Hotel. It jerked to a stop, and a hotel employee dressed in a tan-colored suit and red necktie opened the taxi’s door while the customer in the back seat all but threw his cab fare at the driver. The man adjusted his camp shirt to conceal his German-made SIG Sauer P226 and stepped from the car. He handed the doorman a fifty-baht tip and walked several yards away before a thank-you could be uttered.

The assassin was built well for his profession with a trim and muscular frame. His average height combined with dark hair and brown eyes favoring his Japanese heritage granted valued anonymity when working in Asia. He turned left and walked up the crowded and poorly lit incline while maneuvering past street food stalls busy with patrons. An old woman was cooking beef and noodles in a wok.

Hot oil bubbled, and the spicy aroma was strong and appealing. A teenage girl used a wooden pestle and pounded on vegetables and red chilies in a large mortar. Several Thais and a few tourists sat on plastic stools around small tin tables enjoying the street cuisine. The smell of lemongrass and the coriander herb essential to Thai cooking brought back memories of his sniper training in the jungles of Chiang Mai Province when he was addressed as Sergeant Jim Takada.

The assassin hadn’t used his name given at birth in more than a decade and was presently known by colleagues as Pierre Marron. Dozens of taxicabs and bike taxis were parked in a line along the curb beyond the food stalls. One driver caught his eye. “Need a ride? Can I take you to see young sexy girls and maybe you want sex show? You want boys?” Marron ignored the staccato offers and carried on up the street to Sukhumvit Road where he again turned left.

Marron spotted the Blue Moon Restaurant’s neon sign flashing on and off a block away, and he pulled behind a street vendor’s cart full of counterfeit Major League Baseball caps. He purchased a black Chicago Cubs cap and replaced the plain white hat he’d been wearing. He observed the streets while tossing the old headwear into a trash can.

Marron let himself into the after-hours club and sat down while wondering why he’d allowed himself to break his number-one rule. “Look out for number one,” he muttered. He was waiting to meet an informant with data key to the next operation. It was an annoying and unprecedented request with potential risk. “Was he the only gun in town?”

The detour from protocol had the assassin on edge, and he contemplated the implications of his orders to hold in place a moment before brushing the questions aside to run a check on the room. Nothing waved a red flag, and he forced a smile when a waitress approached him. He ordered a Singha Draft and scanned the tables placed outside the restaurant for those who didn’t mind the heat and humidity.

They were empty, and the main air-conditioned room where he sat was less than half-full. He spent hours in places like this one in countries once classified as the third world. He wondered where he found the patience to stay in place. The last project was complete, and he was ready to leave Bangkok. His hours of preparation had paid off as they always did. He had memorized a checklist, which included visualizing the entry and exit points, practicing local accents, and readying equipment. Readiness was everything, and people in his profession knew awareness of the details kept you alive. “What am I doing here?” The words came out of his mouth as if spit by the assassin.

The Blue Moon would get busy over the next hour with the arrival of young girls and some boys released from work in the entertainment district. They’d join the wealthy foreign tourists, called “farang,” and offer their professional company. The default demand from the scantily dressed and heavily made-up children of the night was at the least a free drink or a bite to eat when their services were refused.

Marron’s location near the rear fire-exit doors offered a peripheral view of everything and everyone in the room. His language skills were impressive, speaking flawless Thai with proficiency in several other Asian languages. Another prerequisite for his line of work was patience, and he’d reached its limit. He stood up readying to leave as his burner phone vibrated in his pocket. Marron answered by offering the operation code of the day, “Vincent.”

“It’s Theo. Get out now. You’ve been compromised and must evacuate,” said the voice.
The threat was confirmed as soon as he stepped near the back door of the Blue Moon. Both routes out of the alley were blocked by motorbikes staggered in gauntlet formation. Marron hesitated for a heartbeat and turned toward the bar’s front door to find a pair of men dressed in security uniforms blocking the main exit.
Marron turned away from the rent-a-cops and stepped into the lane. He walked away from the direction of the busy Sukhumvit Road while removing his SIG Sauer from beneath his shirt. He pulled a silencer from his pocket and fastened it onto the handgun with practiced dexterity. Clouds moved across the sky, shading the alley from the moonlight. The darkened side street was subject to faulty and crackling back-alley lighting and shadows from buildings flanking the corridor.
He stopped thirty yards from the small pack of bikes and assessed the four sun-blackened and raggedly dressed young men. They straddled their bikes, facing into the alley toward Marron.
Their posture and unconcealed interest in Marron telegraphed the gang’s intent, and they stood between him and his objective. A polite “excuse me” wasn’t going to get him past the thugs. His focus sharpened and his mind and body began to mesh. Marron charted the course of every move necessary to escape from the ambush. The professional killer controlled his breathing and heartbeat, remaining calm when he felt the adrenaline spike through his body.
His mind’s peaceful state allowed a clear perspective, and he scanned the thugs, making an instant assessment for the impending engagement. Two of the bikers left their jackets open with firearms concealed under their vests. The other two grasped their bike handlebars with one hand and held blades exposed against their legs with the other.
Marron jogged toward the bikers, forcing two of the rough young men to kick the starter pedals on their bikes. The armed thugs fumbled and pulled at the weapons held tightly against their chests by their vests. Marron’s SIG Sauer spat out two muffled shots, and he moved with the speed and agility of an elite athlete. The sound resonating around the concrete walls resembled the retort of a child’s cap gun. Bloody red mist filled the air, and the two bikers’ bodies slammed to the asphalt with their weapons remaining forever concealed and useless.
The young thugs armed only with blades started maneuvering their bikes one-handed to escape. Marron sighted on the first and fired then moved his aim to the second to deliver another fatal round. The hollow-point bullets penetrated their chests and erupted, finishing the skirmish in less than fifteen seconds. Brass shell casings fell to the ground and bounced on the road. Their metallic ring reminded Marron to scoop them up to drop in his pants’ pockets.
He analyzed the scene with a microsecond-long glance and confirmed the four deaths. The men waiting on motorbikes at the Sukhumvit Road entrance seemed frozen in shock. The rent-a-cops stepped into the alley from the bar’s exit and dropped to the ground when Marron fired one shot in their direction.
No further action was required as most of the bikers rode away toward Sukhumvit Road. The others dropped to the ground and crawled for cover while the rent-a-cops dashed back into the bar. The hesitation allowed Marron time to snatch a motorcycle from one of the shell-shocked bikers. He stomped on the kick starter, and the bike’s engine roared to life.
The assassin maneuvered around two corpses before turning the throttle and accelerating down the narrow alleyway, which emptied onto a thoroughfare allowing him to increase speed and blend into traffic. Marron slowed and positioned himself behind a family of three commuting home on a small motor scooter. He blended into the traffic, becoming another piece of the Bangkok community in motion. 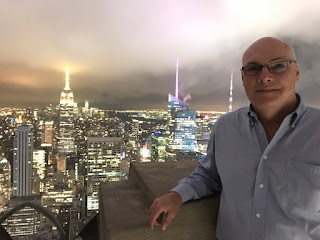 Gordon Campbell is a Winnipeg born Canadian who’s spent most of his life in Japan. He’s worked as an English teacher, a market entry consultant with a focus on the medical and sporting goods industries, and as a sales director for a corporation with multiple product lines.

He’s presently working on the second novel of a series initiated with The Courier, and its protagonist, Gregg Westwood.

He played American football at the University of British Columbia in Vancouver and started in the Canadian championship game known as the Vanier Cup. Gordon is a member of Psi Upsilon Fraternity, Sinim Masonic Lodge, and the Tokyo Valley of the AASR.

When he’s not writing, working, attending one of his daughter’s vocal concerts, pumping iron, or at a lodge meeting, you’ll find him dining with his wife Mako at their favorite local bistro.