Twenty months ago.
Courtney tried to pull away from Max, her heart pounding against her chest. Max was going to kill Weston, He was going to kill him and it was all her fault...
At that point, she’d been with Max for several months, getting deeper and deeper into a relationship with him, but never had she actually gotten any information to take back to her father. Nothing that would take Max down, nothing concrete enough to do any damage to the Southern Boy Mafia and she felt as though she was running out of time.


So, she befriended Weston, pretended to like him until she convinced him that she wanted him. And then, she’d gotten his phone number, called him and invited him to meet with her.
He had.


But the young man hadn’t given up any information that would have hurt Max.
“What’d she offer you?” Max asked Weston.


Weston’s head shifted, his right eye opened ever so slightly, his gaze meeting hers. She could hardly make out the color of his iris because the lid was so swollen and purple from the bruises that marred his once handsome face.
“Did she offer her pussy?” Max asked, his tone lethal. “Is that what she offered you?”


“God, no!” Courtney screamed.
She hadn’t offered him anything. She’d merely tried to talk to him. Sure, the flirting might’ve eluded to more, but she’d never intended to do anything with him. She wasn’t a whore.


“He didn’t…” she uttered, her throat closing around her words. “He didn’t betray you.”
“No? He met with you in the park, sat with you for two fucking hours and talked. What’d you talk about? The goddamn weather? If he didn’t betray me, what did he do, Courtney? Confess his undying love? Ask you to run away with him? What?”


“I betrayed you.” Weston said through swollen lips. “I shouldn’t have talked to her.”
“He didn’t!” Courtney yelled. “He didn’t tell me anything.”


“But you tried, didn’t you?” Max yelled at her directly. “You tried to get him to talk.”
Courtney’s gaze dropped to the floor as she nodded. She’d tried, but Weston had revealed very little. Not even enough to take back to her father.


“Anything you have to say to me, Weston?” Max asked.
Lifting her gaze to the broken and battered man in front of her, she wanted to plead for Max to let him go, but she knew better. He was going to die. This was what happened in Max’s world. This soulless man was the leader of the Southern Boy Mafia, the ruler of the dark and dirty underworld that she found herself living in.
He was the man she’d fallen for. And she hated that, hated that she’d betrayed herself. Even now, even knowing what was going to happen, she couldn’t deny her feelings for Max. He was doing what had to be done. He weeded out the weak links in his organization in order to move forward. It made sense even if she hated it. 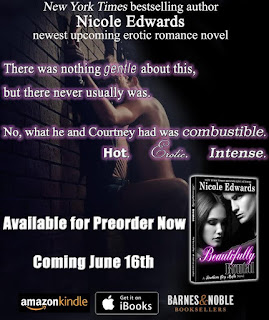 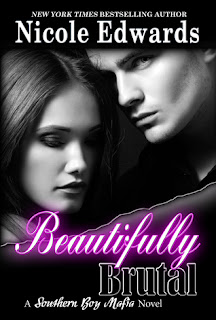 
Sometimes love isn’t beautiful...
Sometimes the only way to describe it is beautifully brutal.
If you think you know him… You’re wrong.
If you think you know his family… Wrong again.
If you think you know his story… You don’t.
If you did, you’d likely wonder how the hell a man like Maximillian Adorite managed to make it to this point in his life. At twenty-nine, he’s experienced more than most people could only ever imagine, all thanksto his family. Organized crime they call it. Mafia.
No matter how they spin it, it comes down to one thing. Max gets what he wants. Except for the one thing he wants most.
Her name is Courtney Kogan.
And now that he’s had a taste of her, Max knows he’ll never be able to let her go.
The Southern Boy Mafia series is a spinoff from the Sniper 1 Security series. It has been set up to be read without reading Sniper 1 Security, however, the characters will frequently cross over. 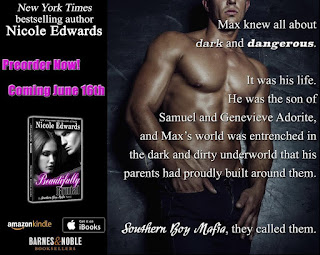 The following Books by Nicole Edwards are ON SALE 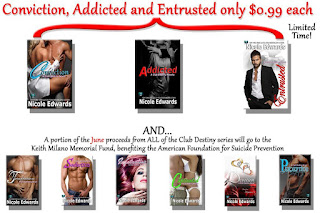 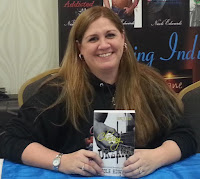 New York Times bestselling author Nicole Edwards launched her professional writing career in July of 2012. Having been an avid reader all of her life and a huge fan of creative writing, it seemed the likely path for her to take. Since then, she has released fifteen books and has no plans to stop. As her full-time career/hobby, Nicole writes steamy contemporary and erotic romances. Nicole is a New York Times and USA Today bestselling author who was born and raised in Texas. Married with three kids and four dogs, she has plenty of interaction to keep her imagination brewing. Her books have been featured in USA Today’s Happy Ever After segment as well as Indie Reader’s best seller list. She has forged her way as an independent author. Although she has a bachelor’s degree in Human Resources, she prefers to be hiding out in her writing cave, talking to the fictional characters that have built up in her head over the years. When she isn’t writing or plotting her next book (sometimes translated to “playing on Facebook”), Nicole loves to read and spend time with her family and her dogs. 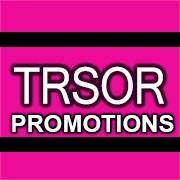 Posted by sldearing at 7:30 AM