Group Review: Heaven in the Dark by Tina Wright 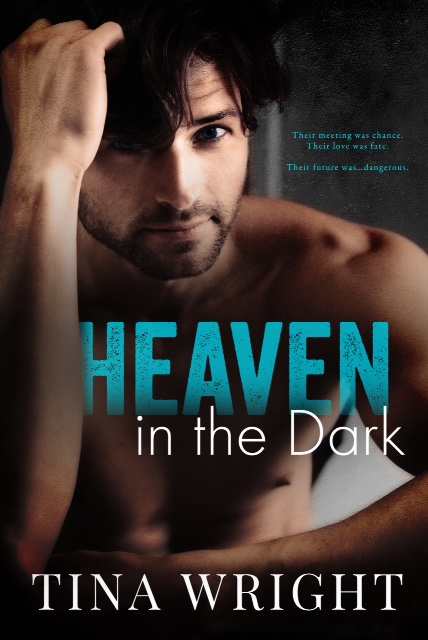 Their meeting was chance.
Their love was fate.
Their future was…dangerous.
Orphaned at 14. Kidnapped at 20. American college student Allie Miller has known more than her share of heartache and terror. But when Italian industrialist David Swift inadvertently interrupts her captors, rescues her and whisks her off to his villa to recover, Allie’s future finally looks bright. She and David embark on a passionate love affair, but soon Allie must battle two new obstacles to her happily ever after: David’s past, including the mysterious American father he will not discuss; and one of her kidnappers, a sociopath with a vendetta against the couple and an affinity for abduction.
Now, the couple’s love…and their very lives…are on the line. Can Allie and David keep history from repeating itself? Can they stop a madman bent on revenge? Or will their pasts destroy any chance of a future?
HEAVEN IN THE DARK contains explicit sexual content and is intended for mature audiences. While it is the first of two planned books in a series, it is a stand-alone novel.

Heaven in the Dark by Tina Wright is a sweet yet predictable romance between Allie and her rescuer, David. Twenty year old Allie was kidnapped and about to be sold to the highest bidder when David walks in on the illegal transaction. Pays for her and brings her home to care for her. You can see traces of Cinderella, Pretty Woman, and Fifty Shades all wrapped up in this novel.  The premise of this, and all these stories, is a young girl wishes for a new life and a handsome, rich man falls in love with her and changes her life forever, which some girls hope for.

For them, this is your kind of love story. The sex scenes were dramatically tamer than Fifty Shades and the story line of older, rich man teaching the young, inexperienced girl about sex is highlighted throughout the story. Other than being predictable there were a few flaws that really stood out to me. The male love interest, David, lives in Milan and speaks several languages yet only says a few words in Italian and the rest in perfect English. Also his housekeeper who we are told has a Scottish accent, you never really hear when she talks. Only one or two words pop up sporadically.  On the flip side of that, the bad Russian guy, you hear his accent when he talks. The other is that the authors tells the reader so much of the information instead of letting the characters share or show us until closer to the end of the story where there were more conversations.

I did like the interruptions in the story to flashback to David’s parents and their love story. It gave some insight in to David’s life and about why he had been closed off to love. For me, I read it. It was a sweet quick read but I didn’t feel any strong connections to the characters to want to continue about their lives in a sequel.  Like Cinderella I am happy to leave it at “and they lived happily ever after.”

Heaven in the Dark by Tina Wright is a decent romance. The writing is pretty good, except for places where the author tells us the emotions and actions and thoughts, rather than showing us or exposing through dialogue. I felt there were a lot of missed opportunities there. I also felt the main characters got together too quickly. It was another missed chance to create a bond of trust and tension (regarding their attraction to one another) between Allie and David, thus giving the reader the ability to bond with them as well. The fact that Allie had just been through a massively traumatic experience and has no idea who David is, then they are suddenly together gave me room to pause.

In addition, Allie is described as being a middle class daughter of collegiate professors, yet she seems to know extremely high end furniture and home decor, which was lost on me personally. I also had a hard time with David's dialogue. I had a hard time hearing his accent, which was obvious when it came to Mrs. Hopkins and the Russians. I also saw the influence of several other popular novels, which isn't necessarily a bad thing, but I felt it led to a lot of predictability. There were a few grammatical errors, but nothing overwhelming or horrible. Also, at times, I felt there were words used that took me out of the story, as I felt they wouldn't use those words, based on their history or nationality. These are my pet peeves of course, and may not bother many people.

Having said that, Ms. Wright is an adept writer, and there is a good story. For those of you looking for a romance adventure, with some sweet characters and some intrigue, this book may be well up your alley. Despite my issues, this was a good book and Ms. Wright definitely did her research in regards to locations, European terminology and major plot points. All in all, I would give heaven in the Dark 3.5 stars.