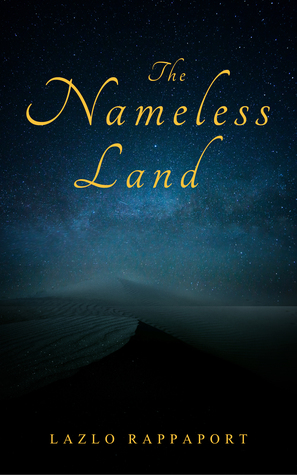 
Desperate to free herself of the dream fox residing in her womb, Anastasia travels off to the shores of the Red Sea and strikes a deal with Lilith:

If Anastasia will fashion three mirrors for the primordial witch, so the sorceress will exorcise the evil spirit.


A poetic parable of the modern woman, the riddle of love, and the question of meaning in a seemingly-godless world.

Add to Goodreads
Nominate Lazlo Rappaport’s The Nameless Land, and you may win a free copy!
—
EXCERPT:
Anastasia turned upon her side, and soon she lost herself in a dream—a memory of the night journey to Arkhangelsk, a memory of that very moment the engineer applied the brake.
Once the train had stopped altogether, the young Anastasia suddenly felt the absence of any soothing vibrations. In addition, she intuited a most ineffable presence standing outside the cabin door. When she opened it just a crack, she found herself face to face with a bald-headed girl dressed in a snug fur coat boasting a silvery diadem-spider brooch pinned to the lapel. “Are you a daughter of Lilith?”
“A daughter of Lilith? No, I’m a ghost. My name’s Svetlana.” As the bald-headed girl spoke, the silvery brooch turned the color of corroded high-tin bronze.
Anastasia glanced over at Mother where she lay snoring very softly in her bed and then turned back. “What do you want?”
The ghost girl did not answer. Her delicate bare feet perfectly silent against the floorboards, she walked off down the passageway.
“Come back here!”
“No, you follow me!” Swiftly the ghost girl continued to the end of the sleeping car, vanishing through the door.
With trembling heart, Anastasia continued down one car after another until she reached the caboose where she joined the ghost girl outside upon the landing.
What a fine Arctic summer. The midnight sun bathed the tundra in a soft-orange haze, and the wildflowers emitted a sweet scent not unlike that of freshly-baked Belorussian honey cake.
The ghost girl reached into her coat pocket, removed a little wooden flute, and performed the tune to Mussorgsky’s “Hebrew Song.” Afterward she turned to Anastasia and poked her right arm with the foot end. “Do you know why the train stops here? If you were to ask the conductor, he’d tell you that we stop here so that we don’t collide with one of the trains out of Finland. But that’s not so. In truth the train stops here only because the Arctic fox compels the train to stop here, for this would be the place where the Arctic fox prefers to climb aboard and prey upon some hapless little girl. Just like he preyed upon me last summer.”
Anastasia pointed at the railway tracks. “Look around!” she blurted out. “There’s no Arctic fox anywhere! You’re a daughter of Lilith, that’s what you are! You’ve come to deceive me and—”
“No, he’s here. It’s just that he’s rendered himself invisible.” The train lurched forward, and the ghost girl smiled. “You’re lucky. But I doubt that you should be lucky a second time, so whatever you do, you should not come back this way.”
“But we must come back this way. Back at the House of Fabergé, the bookkeeper and everyone else, they’re waiting for Mama to bring them a box of volcanic glass.”
The train’s steam trumpet bellowed out its deafening wail, and back in Sinai, Anastasia awoke to find that the fire had almost died out.
She sat up some and thought of the dream, the heretofore repressed memory. How could I forget all that? She thought of her childhood in Russia and sought to recall the precise moment when the invisible fox spirit would have slipped inside her womb.

Author Bio:
Lazlo Rappaport is the pseudonym of a very reclusive author from Ohio. He wrote the original draft of The Nameless Land while night-clerking at a series of Palestinian youth hostels in the Old City of Jerusalem, 1996-1999. Under his proper birth name, he holds an M.F.A. in poetry from Sarah Lawrence College.