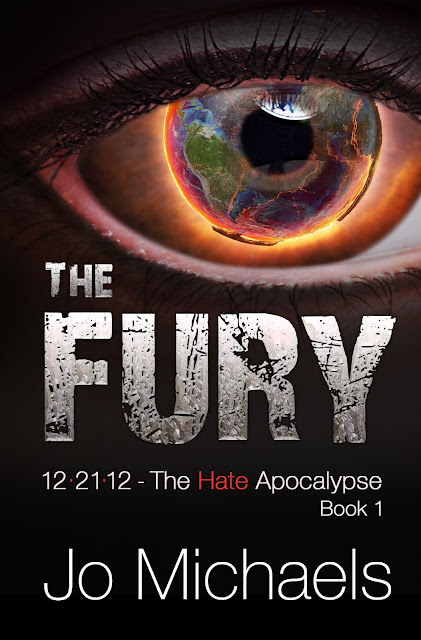 Blurb:
It’s one year until the apocalypse of 12.21.12 is supposed to take place.
Burning buildings, screaming babies, and death will surround us.
It will be the end of the world.
That can’t be allowed.
When six powerful women come together with one goal—to save humanity—they’ll get much more than they bargained for. They join forces and learn to use the gifts hidden within themselves to battle a monster feeding off something too many of us feel in our souls: Hate. But they must first learn how to forgive—themselves as well as others.
Hate is birthing a creature dwelling under Central Park in New York, and the fiend is eager to burst forth and sink his fangs into the Earth.
The Fury, The Visionary, The Beguiler, The Siren, The Prophet, and The Mystic are our last hope, and even they aren’t sure if they can win.
The end is coming, but with it, there may be a new beginning.
~~~
A word from the author.
ON HATE:
I wish for nothing more than a world where people understand the Golden Rule and actually live by it. As you read this series, try to understand what hate does when brought down upon the head of someone who’s different or who makes choices other than what you might have made. Try to walk a mile in someone else’s shoes. Learn how hate can grow and be nearly impossible to stop. Study how to be accepting to those who didn’t choose the path you did. Discover their reasoning instead of casting them off or putting them down. I promise you, they’re struggling anyway. Don’t make their fight more difficult than it already is.
I wrote this series in the hope of opening eyes to a few of the struggles people battle every day, and I hope it changes at least one heart or mind for the better.
Love one another, and go in peace.

Jo Michaels is...
Hi, I'm Jo. Let's forget all the "Jo Michaels is blah, blah, blah" stuff and just go with it. I'm a voracious reader (often reading more than one book at a time), a writer, a book reviewer, a mom, a wife, and one of the EICs at INDIE Books Gone Wild. I have an almost photographic memory and tend to make people cringe at the number of details I can recall about them and/or their book(s). My imagination follows me around like a conjoined twin and causes me to space out pretty often or laugh out loud randomly in completely inappropriate situations.
I have a degree in graphic design, and my journey to the end was one few students who begin that program ever complete. However, this was one case where my memory and OCD tendencies helped me. Graduation was one of the most amazing days of my life. But, my most amazing day was when my now husband proposed. Every little girl dreams of being Cinderella someday, and he pulled off the proposal of fantasies.
At the risk of sounding cliché, I'm going to let it out there and say how much I absolutely adore the man I'm married to. Along with my children, he's my whole world.
I've lived in Louisiana, Tennessee, and Georgia, but I've had my feet in almost every state. Traveling is something I adore, and have plans to someday see the Mongolia I've written about in Yassa.
One of my favorite things is hearing from fans! You can find me on social media most any day of the week. Connect! I'd love to hear from you.

Markaza Turner gazed into her crystal ball for the fifth time since her birthday. From her dream in December, she knew she had to find five girls, but she’d only managed to see the locations of four so far. I wonder if my abilities are getting rusty. Surely, I should’ve seen the fifth before New Year’s Eve. It was January second already, and she felt like she was losing time—which she was. She shook her head to clear the thoughts bouncing around, gnashed her teeth, and concentrated harder. Her patience paid off when her ball began to fog up once more. Leaning in closer, she peered into the depths of the glass orb on the little table situated in the living room as she prayed her mother didn’t walk in.
A view of the entire United States was how the locations first appeared. Then, like on those cop shows where they say, “Zoom and enhance,” Markaza’s subject always came into view one step at a time. So far, she had young women in San Diego, California; Atlanta, Georgia; Chattanooga, Tennessee; and her very own New York, New York. The next one seemed to be in Texas, Louisiana, or Arkansas. She narrowed her eyes at the ball and sucked in a sharp breath when it panned over and zipped right down near the Gulf of Mexico into Houma, Louisiana. Great, being a mosquito feast is not on my bucket list. Oh well…
As she watched, her subject came into view. Wow, the girl is big. Markaza’s saw a bathroom and the girl slamming the door open, sending Markaza flying into the wall on the other side. She groaned and winced. Getting hit is never fun. When the scene shifted, the new girl was showing her class schedule, and Markaza could clearly see the name printed across the top: Bronya Thibodeaux. It was scrawled onto the list in the notebook nearby, along with the location and class schedule, before Markaza’s attention was turned back to the glass. Her palms got sweaty as she stared, wondering what kind of trouble she was getting herself into.
Her ball fogged up again, and she saw Bronya walking down a road with a suitcase in her hand and another very beautiful girl standing in the road, shaking her fists, and screaming. Next to the road was a sign: Thank You for Visiting Houma! Come Back Soon! Don’t Return Lezbo! The red paint and hurtful words on the sign screamed out at Markaza. As if Bronya would ever plan on going back to that. Markaza’s eyes filled with tears as her heart broke. She noted the obvious issue and turned back once again.
Another fog up and the scene cleared to showed six girls in a circle around a huge monster with green venom dripping from foot-long fangs, red eyes that glittered like rubies in a spotlight, and black skin that looked like it was formed of pieces of garbage glued together with tar. Bronya lifted a hand, and red lights began to spin around it. She made a gesture at the monster and it recoiled like it had been punched in the face. Awesome. Bronya’s my fury.
~~~~~
Markaza started to protest, but Bronya insisted, anger at not being able to voice the reason why making her a little meaner than she meant to be. She was instantly sorry, but she bolted from the car when it stopped, quelling the argument.
As she strolled down the road, she admired the deep ditches on either side that were a cacophony of life. Frogs croaking and basking on rocks and dragonflies zooming around eating smaller bugs were two of the things she loved most about Louisiana nature, and the cypress and pine trees smelled wonderful, the Spanish moss dripping off the branches as though trying to reach the water below. Suddenly, she heard gravel crunching behind her and stopped, spinning around. That damned girl was following, her eyes everywhere but the path in front of her. It seemed she was as enthralled with her surroundings as Bronya had been. She crossed her arms over her chest and waited. Sure enough, Markaza walked right into her friend.
“Just what in the hell do you think you’re doing?” Bronya thought she’d been perfectly clear about not wanting to be followed, but that didn’t seem to be the case.
Reaching into her pocket, Markaza produced her cell phone. “I forgot to give you my number and didn’t get yours.” She flipped it open and proceeded to add a new entry: Bronya Thibodeaux—and looked up.
“Fine.” Bronya rattled off the number. “Happy now?” She’d tried to keep the irritation out of her voice, and she knew she hadn’t done a good job, but Markaza smiled anyway.
“No. What about mine?”
Digging the ugly prepaid phone out of a pocket, Bronya punched in the numbers given to her along with the name. “Now?”
“Yes. Thank you.”
Bronya rolled her eyes, turned, and stalked away. She could feel Markaza watching and wondered when she was going to leave. It was bad enough she was rich; if she saw where Bronya lived, there would be no friendship to follow—of that, she was positive. Wealthy people didn’t surround themselves with the poor.