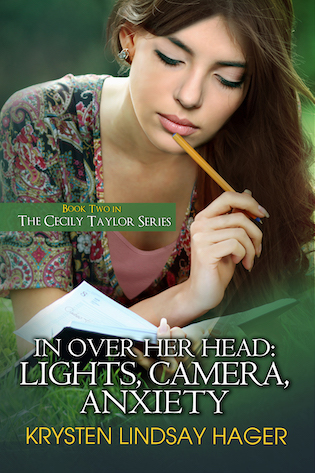 
Cecily feels like she has it all: great best friends, the beginnings of a career as a model/actress, and she’s dating her favorite singer, Andrew Holiday. Then Cecily’s best friend Lila begins to ditch her every time Lila’s boyfriend calls. Cecily feels lost, but she and Andrew begin connecting more and she’s never been in a relationship where she felt so understood. Andrew even begins to confide in her about his anxiety. Soon Cecily experiences her own anxiety on a magazine photo shoot, but she manages to impress the magazine staff. Just when it seems like all her dreams are coming true, everything comes crashing down when a photo of Andrew with another girl appears online. He swears nothing happened, but Cecily is crushed. She feels like she’s lost two of the people closest to her. Was her perfect relationship real or was she in over her head?

“Must be nice to have a hot pop star text you. Do you think he will contact you again?” Lila asked.
If he doesn’t, then I’ll die and probably never leave my room again. “I hope he does. I’d be seriously bummed if I—” Get phone dumped, get blocked online, see he’s dating someone else. “Don’t hear from him again,” I said.
“Does anyone else know he was the reason Zach got so mad at you when he walked in on Andrew trying to kiss you at the video premiere?”
“No, Zach didn’t tell anyone. I feel like it’d be weird if I told people that’s what happened. Like they wouldn’t believe me and think I was making it up to get attention,” I said.
“Yeah, I already heard a few people saying stuff.”
My stomach dropped. “Like what?”
“Huh? Oh…nothing major.” She gripped the steering wheel. “It’s impossible to find a spot on the street on a weekend.” I pressed her again, and she shrugged. “There’s a couple comments on his social media pages.”
Pulling out my phone, I went to the video’s link online and the first comment that came up was:
NoOneAndrewFan: Why did they pick HER out of all the girls in the world?
CaliGirlTwo: They couldn’t find any better than that chick?
Holidate008: She’s like if the word “plain,” was a person.
MusicIsLife: I think the point is that she’s not supposed to be hot, you guys Holidate008: I think she’s supposed to be the opposite of that other girl in the video.
CaliGirlTwo: Obviously Andrew has a jealous girlfriend and told him to find blah girls to be in his video.
SleepAllDayz: I bet Andrew’s managers don’t want his fans to be jealous of any of the girls they cast in his videos. Mission accomplished.
Meghynn: Seriously, I’ve seen cuter girls walking down my street and I live out in the sticks.
KellyKellz: I bet the other actress said they couldn’t cast another hot girl.
Meghynn: Andrew obviously didn’t do the casting for this one.
Holidateforever: Wow! Seems like no one has anything nice to say, all you guys want to do is trash people. if you don't like what Andrew’s doing in his video... then bye!
TeenaRoger: Guys, Andrew would hate all these negative vibes! If you don’t have anything good to say about his work then don't follow his page, don't listen to his music, and DON’T bother commenting.
Holidateforever: I think she’s pretty. Jealousy isn’t cute, you guys.
“Oh crap. I didn’t even think to look at the comments before now. I guess it was so surreal to think I was actually in a music video that it didn’t even occur to me to go on and see what people were saying,” I said as my face burned with embarrassment. “Has everyone at school seen these?”
“Don’t worry about it. People suck and if it makes you feel any better, a lot of people at school aren’t even talking about it because they don’t want you to get all stuck up,” she said.
That was supposed to make me feel better?
“I was barely in the video. Why is everyone attacking me for a five second spot?” I asked trying to keep myself from crying.
“It sucks. I wish Andrew was here and he could just wrap you in a blanket and make you a cup of tea,” Lila said.
I laughed despite the fact I was trying not to throw up on myself. “Yup, like the perfect boyfriend.”

Author Bio:
Who knew all those embarrassing, cringe-y moments in middle school and high school could turn into a career? And who would have thought that daydreaming in math class would pay off down the road?
Krysten Lindsay Hager writes about friendship, self-esteem, fitting in, frenemies, crushes, fame, first loves, and values.
She is the author of True Colors, Best Friends...Forever?, Next Door to a Star, Landry in Like, Competing with the Star, Dating the It Guy, and Can Dreams Come True. True Colors, won the Readers Favorite award for best preteen book and the Dayton Book Expo Bestseller Award for children/teens. Competing with the Star is a Readers' Favorite Book Award Finalist. Landry in Like is a Literary Classics Gold Medal recipient. Krysten's work has been featured in USA Today, The Flint Journal, the Grand Haven Tribune, the Beavercreek Current, the Bellbrook Times, Springfield News-Sun, Grand Blanc View, Dayton Daily News and on Living Dayton.